Mayor de Blasio announced this afternoon a three-year plan to phase out the use of cluster-site homeless shelters, the more than 3,000 privately owned apartments in 260 buildings where the city has paid as much as $3,000 per month to house poor families and, in theory at least, provide them with services. Together, the city says it spends $125 million a year housing and serving 11,000 people in the complexes.

The change follows a scathing de Blasio-commissioned report by the Department of Investigation that found cluster sites are the worst maintained, least monitored type of shelter housing, with the least adequate social services, and in many cases no social services at all, nor any measures in place to compel landlords to fix dangerous conditions. Those and other shelters have, since the report's publication last March, become the focus of a face-off between de Blasio and Comptroller Scott Stringer, who has blocked city payments to operators of decrepit shelters and those lacking contracts.

That is the case, for instance, at 60 Clarkson Avenue in Brooklyn, where until the beginning of November, the Department of Homeless Services rented all but a handful of 83 formerly rent-stabilized apartments. Former shelter residents and long-term rent-stabilized residents are now suing owner Barry Hers, aka Barry Hersko saying that state rent rolls show baseless rent increases on both shelter and tenant units over more than a decade. 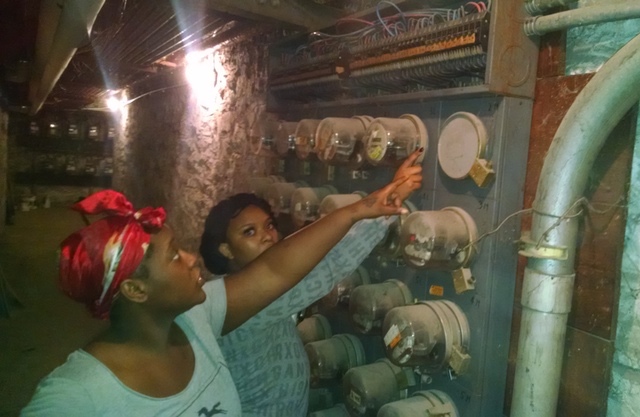 At 60 Clarkson Avenue, Tyquasia Davis, left, and Ravan Huddleston inspect the building's meters and circuit breakers, which they believe the landlord tampered with to kill their electricity. (Nathan Tempey/Gothamist)

Rent-stabilized buildings, built before 1974 and containing more than 6 units, make up nearly half of the city's rental housing stock (pdf). Following the cluster sites program's creation under former mayor Rudy Giuliani and during its drastic expansion under Michael Bloomberg, some owners of rent-stabilized and otherwise regulated buildings realized that housing homeless people was potentially more profitable and, given lax enforcement, required little in the way of maintenance, in some cases prompting mass buyouts and taking away regulated housing stock to make way for for-profit homeless shelters.

A tenant advocate active with residents of 60 Clarkson praised the decision to end the use of cluster sites.

"We believe the mayor’s decision to phase out the use of cluster site shelters is a win for housing advocates who believe this program has been broken for a long time," said Jen Berkley, an organizer with the group Tenants and Neighbors, in a statement. "To take affordable apartments off the market and pay landlords top dollar for the use of the apartments to temporarily house homeless families doesn’t make sense in our city where affordable housing is scarce and the number of rent-stabilized units is constantly declining."

Berkley urged the city and the state Department of Housing and Community Renewal, which monitors rent-stabilized buildings, to restore units including those at 60 Clarkson to rent stabilization at "the proper rent amounts."

"Hersko would be wise to accept rent-regulated rents from the Clarkson tenants since he is now getting nothing," she said.

One former shelter resident and husband of a plaintiff seeking to stay in the Prospect Lefferts Gardens building was a resident of another rent-stabilized building owned by Hers, also on Clarkson Avenue, in the 2000s, before he became homeless. He remembers making a sport of trying to hit rats with a belt from the couch in his former apartment, and years later, warning his wife when he learned who owned the shelter they had moved into, which turned out to also be in terrible repair. DHS has ceased using 60 Clarkson as a shelter, but the other Clarkson building and one next door are now cluster sites. Together, the two have 441 open building violations.

In its announcement, the Mayor's Office pledged to return "as many of the units as possible" to "low-rent housing." Ending the use of cluster sites is part of a 90-day review that began last month, according to the release, and coincided with the announcement of the departure of DHS Commissioner Gilbert Taylor. His role is currently being filled by Human Resources Administration head and former Legal Aid Society chief Steven Banks, a long-time housing advocate and 2014 de Blasio appointee.

As part of the proposed phase-out process, some buildings are supposed to be converted into "affordable permanent housing" for shelter residents to move into as part of a model the mayor is calling Gateway Housing. It's not clear exactly how that will look, or how much of it will built, but mayoral reps said it will mix shelter apartments and subsidized low-income apartments in the same buildings, and offered the University Heights complex Landing Road Residence, where construction crews recently started work, as a model. "Responsible" shelter owners are supposed to be encouraged to convert their buildings into these types of residents, though it's not obvious how.

The Mayor's Office said the new model will cost a third less than traditional shelters, which run at least $37,000 a year per family.

De Blasio and Banks also announced they'll stop payments to owners of shelters with chronic building code violations. Previously, the Comptroller's Office had been blocking payments for such buildings, as well as to shelter operators who lack contracts, and de Blasio had resisted, issuing loans to fill the gap, with his officials arguing that the city's duty to provide shelter takes primacy over compelling fixes. As of September, the New York Times reported that the Comptroller's Office had blocked 33 contracts and DHS had withdrawn 21 more because of demands by Stringer that the city not pay to place people in ratholes.

Now, the de Blasio administration has changed its tune.

"If building code violations and fines are not a strong enough incentive for landlords with chronic conditions of disrepair to fix their property, we believe that withholding the rent will be a powerful tool that they won’t ignore," Banks said in a statement. "And when repairs are made, that will also benefit other renters in the building who are suffering through unacceptable conditions."

In the past, de Blasio reducing shelter subsidies by 10 percent was enough to prompt one Bronx operator to kick out residents in retaliation. It's unclear what measures would be put in place to prevent such an outcome when totally stopping payment.

Some cluster site owners are so unscrupulous they are currently on the Public Advocate's Landlord Watch List, according to the Mayor's Office. A DHS spokeswoman said she could not immediately find out how many are listed, but that a new round of inspections will begin soon.