NYC Will Install 21,000 More Door Alarms In Schools To Stop Kids From Wandering Out

"Although this is solemn, we're here to celebrate. So you can be as loud as you want," said Councilmember Robert Cornegy Jr., addressing advocates and parents of special needs children on the steps of City Hall this afternoon.

The group had assembled for the first official progress report on Avonte's Law. Passed last summer, the legislation is named after Avonte Oquendo, the 14-year-old autistic boy who disappeared from his Queens school in October of 2013, prompting a city-wide, three-month manhunt that ended in the discovery of his remains in Hunters Point last January.

Darlene Boston of Bed-Stuy is an organizer for StudentsFirstNY, and the mother of an autistic child who just graduated from high school. "My son is non-verbal, so if he got out of the building, he would be in complete danger," she said. "As the parent of an autistic child, one of the scariest things you can do is entrust the safety of your child to the city of New York. We do this every day, and we hope for the best."

In accordance with Avonte's Law, the DOE has visited all of the public elementary, middle and high schools in New York City—as well as all of the District 75 buildings that serve mentally disable students—and assessed their need for safety equipment, most notably door alarms.

Speaking on behalf of DOE Chancellor Carmen Fariña, Deputy Chancellor Elizabeth Rose reported that of the 1,263 schools surveyed since the fall, 1,229 of them, or 97%, have requested door alarms. She added that installation began in April, and all 21,000 alarms will be installed by the end of the year.

As for the schools that didn't request alarms, Rose said that some of the schools had alarm systems already, while others are contained on college campuses and "have their own security." 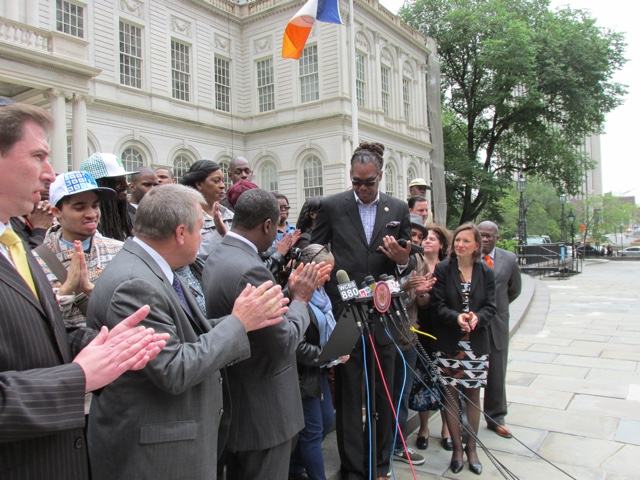 The alarms are being installed on "secondary exit" doors, as the front doors of public schools are monitored throughout the day. Last January, school surveillance footage revealed that Avonte had run through the front door of his school, which had been standing ajar for thirty minutes. And a lawyer for the Oquendo family said last June that Avonte had walked past the school's main security desk twice before leaving the building.

Carmen Alvarez, VP for Special Education of the United Federation of Teachers was cautionary this afternoon. "Remember: The alarm is the measure of last resort," she said. "And we're hoping that no child ever tests that last resort."

"The whole point of an alarm, is to prompt a response by professionals in the building," added Councilmember Cornegy.

The Office of Youth Safety and Development will start conducting door-alarm response-training sessions this June, for all principals, school safety agents, and teachers. Rose added that, in addition to door training, the DOE is going to home in on hectic and transitional times of day, like lunchtime and dismissal, when "students are in motion...[and] have the greatest potential to leave the rest of their class," as well as surveillance camera upgrades.

Last month, Special Commissioner of Investigations Richard Condon released a report on child supervision in New York City public schools. His office counted 279 complaints about unsupervised children in 2014—a 75% increase over 2013—and 160 instances of children leaving the school.

#autistic
#avonte oquendo
#avonte's law
#door alarm
#missing persons
#original
Do you know the scoop? Comment below or Send us a Tip