As atmospheric warming gallops forward, and as the waters rise all around us, hurricane season poses an increasingly dire threat to NYC. With calamity looming in the near-to-middle future, the city has long-term plans to fortify Manhattan's lower half to thwart tides and storm surge. In the meantime, as part of a temporary mitigation effort, the city's Interim Flood Protection Measures (IFPM) will utilize double-wide, triple XL sandbag structures stretched along part of Manhattan's southern point. They're like the pixel snakes from everyone's favorite Nokia game, only bloated to extreme proportions.

No one has bigger sandbags than New York City. Nobody. Our sandbags are the biggest in the entire world. And not only do we have the biggest sandbags, but the best quality sand.@NYTpatrick⁩ https://t.co/Tb4f0mT2jZ

According to the Office of Emergency Management, the city will be lining a section of the East River Waterfront Esplanade with four-foot-tall HESCO barriers, which are tarp-lined, wire-mesh cubes that can be filled with sand or dirt or gravel and linked together to form a wall, from Wall Street up to Catherine Slip near the Brooklyn Bridge. (Similar models have previously been deployed in Red Hook and in Astoria.) The bulwark at Dirtbag Mile will feature 18 gaps "to allow for vehicular and pedestrian access" to the cordoned-off area: when storms gather on the horizon, the Office of Emergency Management will patch the holes with Tiger Dams (plastic tubes you fill with water and stack). 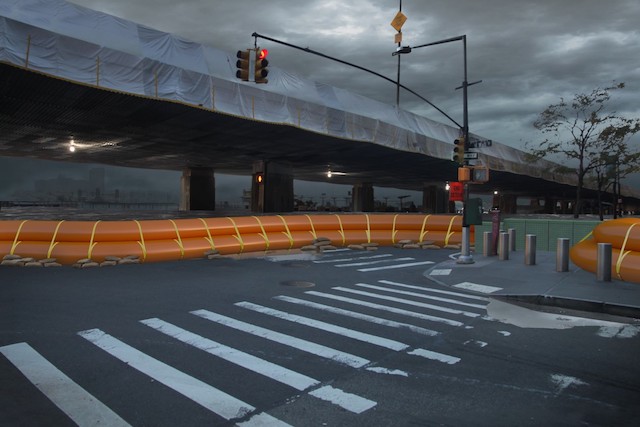 Personally, I see these and am strongly reminded of the long, pellet-filled logs my grandmother used to jam into the cracks under doors, to guard against drafts. You know the ones: 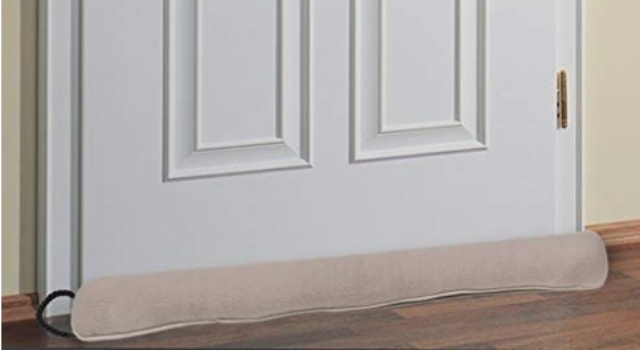 Local business owners, some of whom dealt with the fallout from Hurricane Sandy firsthand, do not seem entirely satisfied with the fix.

"Six years of studying it and you come up with sandbags? Really?" Marco Pasanella, owner of a 180-year-old, river-facing building on South Street, scoffed to the NY Times.

In a separate interview with CBS New York, Pasanella pointed to a flood line, leftover from Sandy, on the wall of the building's wine shop. During the 2012 storm, the water rose five or six feet within the shop. Going into hurricane season, Pasanella feels skeptical about the dirt wall. "It doesn't exactly leave me brimming with confidence," Pasanella told CBS. On top of seeming insufficient to block storm surge, the dirtbags only last about five years. 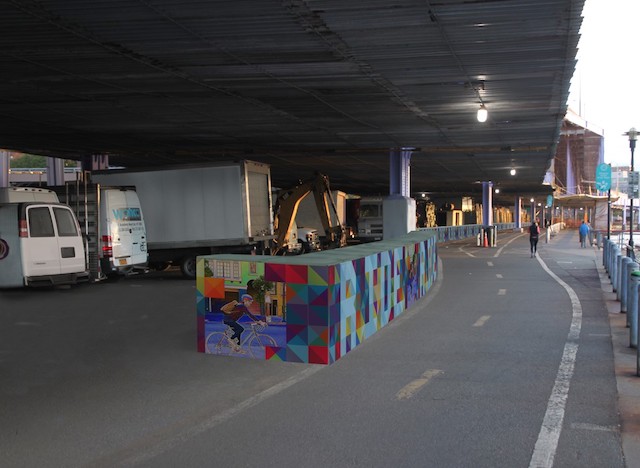 A bunch of child-height sandbags won't do much to beautify the urban landscape, so the city will invite local artists to help mitigate the FEMA vibes and, ideally, mollify disgruntled residents who hate looking at these eyesore sentinels. As Regional Plan Association Vice President for Energy and Environment Robert Freudenberg explained it to the Times, the important thing is that the city comes up with a game plan, and quickly.

"We're in the Wild West of adaptation where it's like anything goes," Freudenberg said. "It comes down to the need to do something soon. Sometimes that looks a little uglier than the visions that are laid out."

As for the long term, Mayor Bill de Blasio unveiled a $10 billion plan in March that would extend Lower Manhattan out into the East River. That's going to be a mammoth undertaking, of course, so in the meantime: Sandbags. Just very ,very big sandbags to guard us from the (even bigger?) waves. Do you feel safer, knowing that our shores will soon be guarded by a troop of humongous dirt snakes? Or are you still worrying about the mass death of amphibians and marine life we'll witness in coming decades? If the latter, hard same.