Unlike traditional buses, SBS buses travel in dedicated lanes. Most also have all-door boarding, so riders don't have to stand in line, and signal priority technology that can prolong a green light for an approaching bus.

"Bus riders deserve faster, more reliable service—and the growing number of riders on SBS buses has found that they are getting to work on-time, and getting home to family faster," Mayor Bill de Blasio stated Friday.

In most cases, the city will upgrade existing routes rather than create entirely new ones. The list of routes includes Tremont Avenue and Gun Hill Road in the Bronx; Church Avenue and Flatbush Avenue in Brooklyn; 14th Street in Manhattan; Hillside Avenue and Northern Boulevard in Queens; and the North Shore of Staten Island. The full list is here. 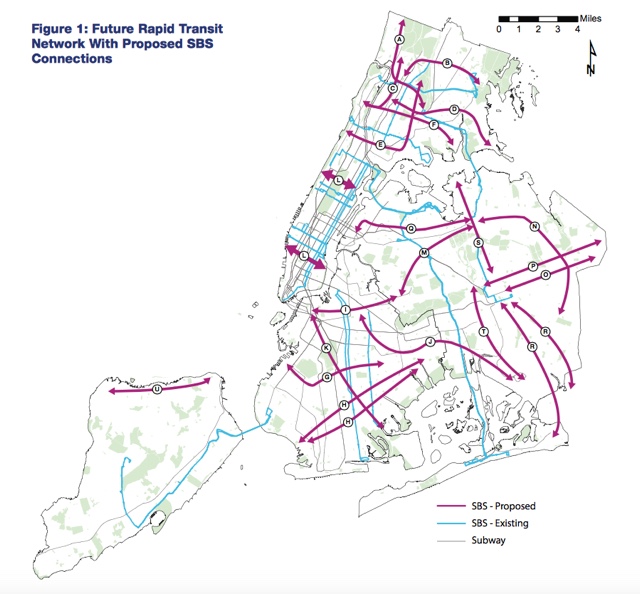 The Department of Transportation is prioritizing popular routes that are notoriously slow, lengthy and unreliable, according to a Friday press release. Between two and three select bus service (SBS) routes will launch each year.

There are currently fourteen select bus routes in NYC, according to City Hall, up from six in January 2014. Woodhaven/Cross Bay Boulevard in Queens and Flatlands Avenue/Kings Highway in Brooklyn are due for SBS treatment within the next year. The so-called Bus Forward plan will eventually bring SBS to 30 percent of NYC bus riders, the city predicts.

Focus areas are subject to change but include Broadway and Burnside Avenue in the Bronx; Lexington Avenue and West 145th Street in Northern Manhattan; Malcolm X Boulevard and Church Avenue in Central Brooklyn; Jamaica Avenue and Fresh Pond Road in Queens; and Bay Street on Staten Island.

City Hall will do outreach over the next year, with upgrades implemented in 2018 and 2019.

"I think it's great to see a commitment to expanding SBS, but that there's a lot more that needs to be done for our entire bus system," added Tabitha Decker, Deputy Executive Director of the Transit Center, which studies NYC bus ridership and performance. "It looks like the city and DOT are laying out a plan to do the exact right things, but they don't have a clear or ambitious enough timeline for doing those things."

According to Decker, there are three basic improvements that can have a big impact on travel times. First, "bus lanes that have a real enforcement and a stronger design than the bus lanes we currently have: like a physical separation" between bus and cars. For example, sections of the M23 route on 23rd Street in Manhattan have "light physical barriers" already.

Signal priority is another big one (Transit Center argues that the city could manage 20 installations per year, rather than two or three) and all-door boarding.

Average weekday bus ridership dropped 150,000 passengers between 2010 and 2015, adding up to a loss of almost 50 million rides a year. Advocates point to the slowness, and general unreliability, of the system.

#bus routes
#sbs
#original
Do you know the scoop? Comment below or Send us a Tip