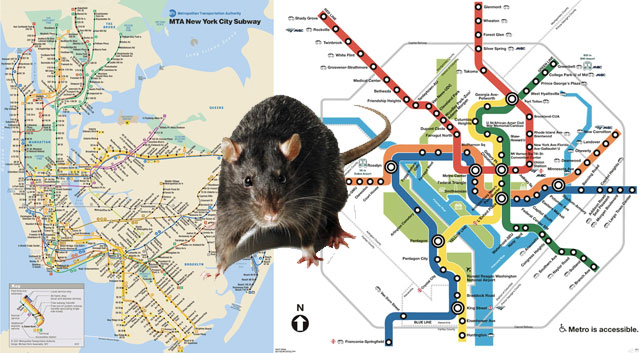 It all started with a NY Times reporter-blogger's ride on the DC Metro. The Times' Jennifer 8. Lee spied a poster in a Metro subway car, showing a rat along with the copy (emphasis is ours): "Unlike some subway systems (which will remain nameless), you don’t see rats the size of house cats roaming the Metro. Why not? Because we are so strict about eating and drinking in the system. So help us keep the critters away. Please don’t eat or drink on the Metro.”

Lee bristled that the Metro would taunt NYC about our unofficial mascot, (even though a Metro spokesman denied the ad was referring to NYC) noting, "It’s a little out of form for another city to needle another about our rats," and proceeded to take down D.C., ending with, "City Room will say, sure, Washington’s system may be rat-free, but its subway map also has all the sophistication of Fisher Price."

Oh, snap! Our Beltway sibling DCist took umbrage, as did its readers. Possibly the most withering comment (and there are many!) is from DCist commenter monkeyrotica:

Who the f**k wants a sophisticated subway map? WTF does that even mean? I'm thinking something in an a nice font like Trajan with pictures of sea serpents around Rockaway with a scroll in their mouth that says, "Here There Be Monsters."

Welcome to Dumbassville (aka Park Slope). Population: you.

Ouch, but love the idea of scroll-bearing sea serpents near Rockaway. Anyway, it's a reminder of the simmering feuds between urban centers - and between NYC subway map designs (Kick Map versus the current design).

And some thoughts on how NYC's subway system stacks up against the world (three words: Twenty-four hours).

What we know about slain NJ Councilmember Eunice Dwumfour