The scheme which gives housing developers lucrative tax exemptions in exchange for token numbers of affordable housing is set to expire this summer. At a City Council hearing yesterday, elected officials said that unless the controversial 421-a program was overhauled to prevent luxury developers from exploiting the system, they were content to let it die.

"I'm here today to declare that this program is outdated and if it is not eliminated, it must be revised to be more equitable in order to benefit those who are affected the most by this housing crisis," Brooklyn Assemblyman Walter Mosley told the City Council's Housing and Buildings Committee. "This program, which cost the City of New York $320 million this past year alone, is shifting the burden of taxation unjustly on those who can least afford it—the hardworking families of New York City."

Housing Preservation and Development Commissioner Vicki Been tried to explain to the city council that her department has limited control over the program, which is a state law. "We can't force owners, but we can provide incentives," she explained. "We will do everything to preserve units....We use every guilt trip that we have."

While elected officials and demonstrators disparaged the 421-a scheme, the City's hands are essentially tied. The City Council does have the ability to make the program more restrictive, but Been noted that local changes wouldn't come into effect for a year, a year during which the state is able to reverse any decision made by the council.

"This was legislated from Albany. I'm not here to defend the program," Been said. 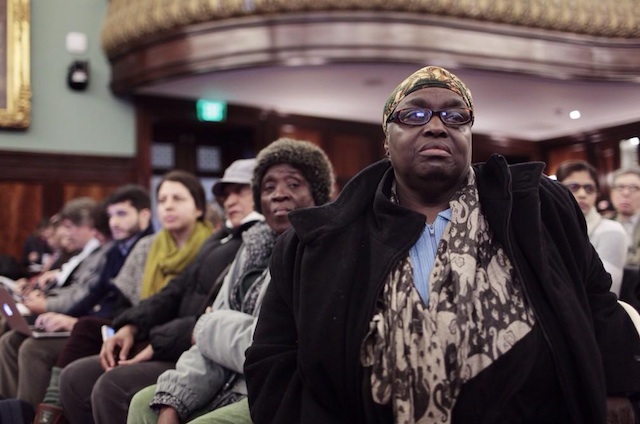 Assemblyman Mosley's borough contains some of the most egregious examples of developers taking taxpayer money to build luxury units that most taxpayers can't afford: four units clustered on Gold Street in Downtown Brooklyn received more than $56 million in subsidies and created only a handful of affordable units. The IBO has determined that in 2013 alone, the 421-a program doled out $1.1 billion in tax breaks.

New residential buildings of four or more units automatically qualify for the tax breaks, and in areas inside the Geographic Exclusion Area—which includes all of Manhattan, and some parts of the outer boroughs—developers are required to set aside 20% of the units as affordable housing.

Councilmember Helen Rosenthal said the Upper West Side stood to lose around 2,500 affordable units as their terms expired, and that residents were already being pushed out by eager landlords.

"The owners are licking their chops," said Rosenthal. "We want permanent affordability."

Many councilmembers spoke fervently about the impact the 421-a tax breaks have on their constituents. Antonio Reynoso accused the HPD of "going through the motions while my community is in need" as he spoke about the displacement of longtime Williamsburg residents in the midst of luxury developments.

Jean Folkes, 73, a member of the Flatbush Tenant Coalition, said that while the 421-a program was initially useful, its days of relevance are long gone. "When it started in 1970, it served a purpose, because people were running away from the city, they were not building. And they needed to keep people in the city. But now it has evolved, it's not affordable housing for tenants anymore," said Folkes. "Meanwhile our neighborhood of Flatbush, we're being driven out, and the landlords harass the tenants, they don't do repairs."