Organizers of the NYC Triathlon have cancelled the Sunday event, as the city is on the brink of a heat wave. Athletes will be given refunds, and organizers will be donating thousands of bottles of water and Gatorade.

The triathlon route starts with 1500M swim in the Hudson River by the Upper West Side, followed by a 40K bike ride into the Bronx, and capped off with a 10K run that finishes in Central Park. Here's the statement from organizers:

In partnership with city officials in New York City and after weighing all options to ensure the safety of athletes, volunteers, spectators and staff due to the oppressive heat and humidity forecast on race weekend, it is with great disappointment that we announce the cancellation of the 2019 Verizon New York City Triathlon.

This difficult decision was made following a comprehensive review and, ultimately, with the goal of prioritizing the safety of everyone participating in or otherwise involved with the execution of the event. As the producer of the event, Life Time is committed to ensuring exceptional event experiences. However, given the predicted weather conditions and with the guidance of the City, we felt this to be the necessary and prudent decision. All athletes will receive a refund of their event registration fee.

On NYC Triathlon's Facebook page, participants were mostly supportive of the decision, though some said 2018 was hotter and also complained about Mayor Bill de Blasio pulling the strings. One irate person said, "Coming from out of [the] country, if they cancel or change this I will not be happy. I've spent a lot of money to participate. This is a triathlon! It is supposed to challenge us. I would understand if it was a casual charity race. I have been training in this heat." 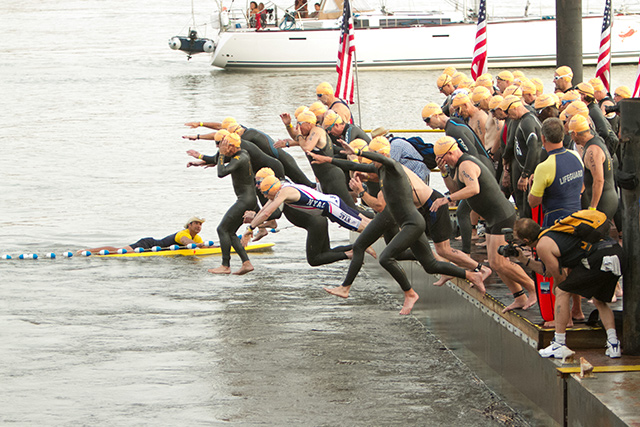 Triathletes in the 2012 race (AP / Shutterstock)

Another upset athlete wrote, " I'd like a refund from TriBike Transport... JetBlue charged $100 cancellation fee. Hilton Marriott said no cancellations within 50 days.... I guess we'll let's see if Hilton does the right thing with an exception to that policy. The race will refund the money, so we have that. Should be interesting to see what the damage is here. I look forward to seeing my bother and his family at Chicago Marathon." Organizers said they were in touch with Hilton about room cancellations and would try to have more details on Friday.

"Granted conditions are projected to be difficult, but isn’t that the point of a triathlon! BS. We can all thank our POS mayor and societies 'kiddy glove' mentality for this," an infuriated athlete wrote. "Let me make my own decisions. I guess I’ll go eat fast food all day and drink my self silly instead. #DeBlasioSucks" Another echoed that sentiment, saying, "Ridiculous!! The mayor of course who has no experience chimed in this morning with his opinion of 'I just don’t get why people race in heat'"

Others were in favor of the cancellation, one writing, "Safety first... I’ve been at races where people have suffered from heat stroke, dehydration, hypoglycemia and luckily as a nurse I know what to initially do. I’ve also witnessed a heart attack during a race when humidity and temperatures [were high. Fortunately] other medical personnel reacted right away... I know it’s disappointing when races get canceled due to extreme weather conditions. Races can be rescheduled but we can’t get a life back."

One poster pointed out that the athletes aren't the only ones out there in the heat, there are also "volunteers, race staff, police and EMTs... If the race has less volunteers because it’s too much for them, you’d probably complain about lack of support. If someone is hurt or dies because of that, we’d be calling for their heads."

Many, though, agreed that given the punishing conditions of the triathlon, that organizers should consider moving the date of the event to the spring or fall.