NYC To Girls: You're Beautiful

The city under Bloomberg has conceived some pretty ghoulish posters designed to "raise awareness" on various issues—teen pregnancy, smoking, piles of fat spilling out of your soda. If you think back far enough, there's a horrifying graphic for just about everything!

This round of Nudging Posters has a slightly more upbeat agenda—assuring young girls that they're beautiful, no matter what New York City and its surfeit of leggy twig people says.

The posters—and accompanying city-sponsored fitness programs and #Imagirl Twitter campaign—are aimed at girls ages 7 to 12-years-old, the idea being that body-image issues can be addressed early on before the real fun begins around age 13.

More than 80 percent of 10-year-old girls are afraid of being fat, studies cited by the campaign show. By middle school, between 40 and 70 percent of girls are "dissatisfied with two or more parts of their body, and body satisfaction hits rock bottom between the ages of 12 and 15." It adds that such a hit to the self-esteem can lead to smoking, alcohol abuse, bullying, early onset sexual activity and obesity. 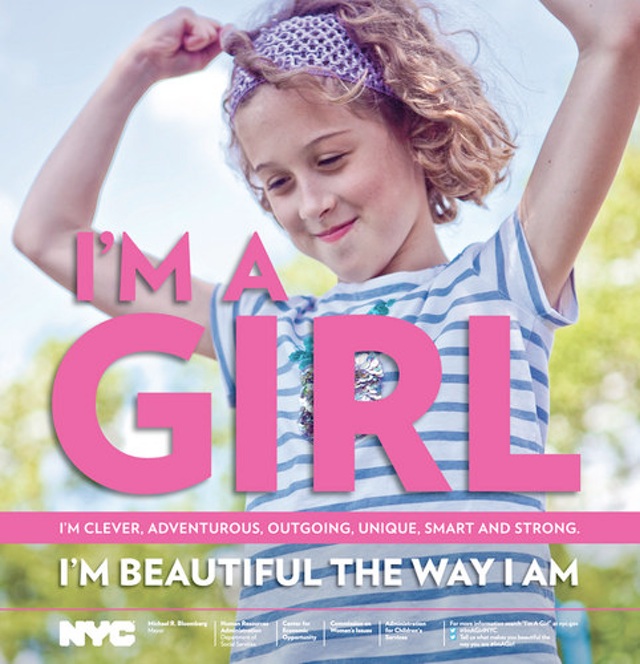 The campaign was spearheaded by Samantha Levine, Bloomberg's deputy press secretary, who told the Times she was inspired by columnist Cheryl Strayed, who referred to a failure of feminism "was that women still worried about what their buttocks looked like in jeans."

“I think being a woman in this society, it’s sort of impossible to not be aware of the pressures there are around appearance, around weight, around trying to always look a certain way,” Levine told the paper.

The NYC Girls Project homepage does not, however, offer any guidance on what to think when the mayor himself instructs party-goers to "Look at the ass on her." Baby steps.

#ad campaign
#health department
#self-esteem
#original
Do you know the scoop? Comment below or Send us a Tip