We'll run a different teacher profile each day this week (read them all here). Today we feature Dre, a special education teacher with a specialization in English who teachers in Harlem. This is Dre's first year of teaching.

Going to New York City public schools influenced my decision to become a teacher because I saw teachers show me dedication and commitment when I was being young and dumb and running around without a clue on what a smart decision was. I was turned on by being bad, influenced by negativity, but those teachers would let me know, “You know, that’s really not the way to go.”

What they did for me inspired me to take on that role for the next generation of misled, inner-city kids, especially black kids. I personally feel I have had a privileged upbringing, as far as education. I did have a single mother who raised me, but she was educated and she knew what I would need in order to be successful. She didn’t have money to ensure I was going to make it but she made sure I had the opportunity to walk down the right path.

I ended up in a good public school, Frederick Douglass Academy, which is in the same network of schools I’m teaching in now. There were many teachers there who were very instrumental in taking me from a young boy and turning me into an aspiring young man.

One time I had gotten in real big trouble at school. My mother had to come in—I was an upperclassman. It was sometime around the time my grandmother passed. There were times where I thought I just didn’t care anymore. There were instances like this where my mother would have to come into school, miss work, lose jobs because she couldn’t miss more days. My teachers would tell me, “You’re going to break your mother’s heart.”

The parent having a relationship with the teachers reinforces a student’s desire to succeed. There’s an apathy towards life in inner cities, especially in impoverished neighborhoods, because what you see around you is your end all, be all. If the only thing you can look forward to is becoming a bum on the corner, why you going to school?

My basketball coach had a system on his team where, even if you didn’t have the good grades to be on the playing roster, you could be in the basketball program. You could come to study hall, get help with your homework.

I played four games of high school basketball, but I was on the team 9th through 12th grade. You can’t tell me I wasn’t a part of that team. Those extracurricular activities—having the chance to travel with the team, even just up to Westchester—playing games in Mount Vernon or playing games in Long Island—those were opportunities to just get off the block. So many inner-city kids who go to public schools, they don’t see beyond the block. 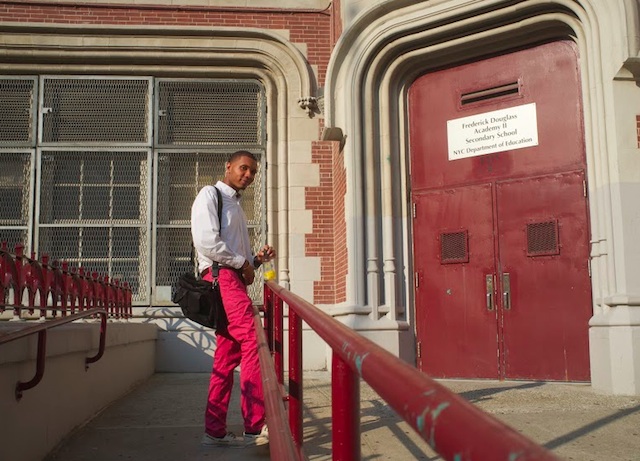 I was born in Washington Heights in Columbia Presbyterian Hospital. Malcolm X was killed at the Audubon Ballroom in Washington Heights. My mother, on her way to the hospital—her water broke right in front of this building, where Malcolm X was assassinated. So that’s how my middle name became Malcolm. But I spent most of my life in Brooklyn. I was raised in Flatbush. However, going to school in Harlem, I spent time around the entire city.

I want my star students to hit a bump in the road, in their expected path of ease and success, so they have to reflect on their work and improve. I want my struggling students to have an epiphany about a skill that they possess that they can then use to take advantage of other opportunities. I want to be able to collaborate with my coteachers and every other teacher in the building, PTA, staff, principals, assistant principals in ensuring that all the students support each other, that it’s a safe environment.

I don’t want people feeling threatened to come to school. I remember when I came to school, I wouldn’t want to share certain ideas because the status quo was, “You don’t talk about that.” I definitely want to create an environment where all my kids are encouraged to encourage each other. They don’t need to all agree with each other, but they need to support each other and understand why they are all important, why they all matter to somebody.

I went to Frederick Douglass from 7th to 12th grade. I was in trouble so much, I was usually in the guidance office or the principal's office. My guidance counselor, any time I got in trouble, I would come into his office, just steaming, Hulk-mad. He'd say, “Sit down.” He wouldn't say anything to me for the first 10 minutes, just, “What's up?” I didn't even have to tell him what the problem was. He would type away at his computer, pretending to be doing his work, while he was probably writing something up about me.

We would have a real calm conversation about why this behavior can spill over into adulthood. The punishment won't be a two-day suspension anymore, it won't be your mother coming to school anymore—it will be her having to talk to you through glass. He was a counselor so he had to hear you out, talk to you through things, mediate situations. There was a time I was going to have a fight with other students and he sat us down to say, “What's wrong with y'all?” He was real cool, not saying one person was wrong or right over the others.

But our principal, his message was, “Okay, you keep talking crazy, you see this guy here? He'll be back for you.” And he would be pointing at a school safety agent. Another kid got arrested at school and the principal called me out of class into the office. The other kid was getting written up and he said, “You know this will be you next if you keep this up.” He could be insensitive at times, but it helped it put the fear of God in you.

Going to jail would always be alternative to not doing well in school. It wasn’t like, “Hey, if you don't do well in school just go get a job.” You don't do well in school, you don’t do well in life, then you go to jail. Your family doesn’t have any resources for you. Your father doesn't own a business. What are you going to fall back on? Having the principal put it in your face and having the guidance counselor drop the wisdom in your ear—it was a balance of good cop, bad cop.

My little cousin goes to a charter. She’s 12. Her parents are not book nerds but they are well educated. This girl is really smart and she goes to a charter school. Do I think she’s getting a good education there? Yes. Do I know that she’s developing good skills to become a social member of society? Yes. My bias against charters is only really based on the videos I’ve seen, where kids do robotic routines, but I don’t know, I’ve never been in one more than five minutes.

Training this summer was fun. In every section that I taught, there was a student who I know I’m going to see this year with the same behaviors, the same actions, just on a different face. When students give up on themselves, that’s where my frustrations rest.

This year, I’ll be teaching mainly 9th and 10th grade global history. I came up with an elective I’ll be teaching. Students will write essays demonstrating their understanding about the influence of geography on patterns of human behavior. The focus will be on humans and how they interact with their landscape and the conflict that causes.

#charter schools
#DOE
#nyc teacher talks
#public schools
#uft
#longform
#original
Do you know the scoop? Comment below or Send us a Tip