NYC Teacher Talks: "It Was A Culture Shock, For Sure"

We'll run a different teacher profile each day this week (read them all here). Today we feature Bridget, a special education teacher in Hell's Kitchen in her seventh year of teaching.

Some of my sisters have learning struggles and social/emotional struggles. We went to a Montessori school for elementary school and middle school and then I was thrown into a public school in 8th grade. I went to a South Side Chicago public school that was 2,500 kids, 95 percent black. I went from a really small Montessori school to this giant public school where there were fights in the hallway and metal detectors and uniforms and all this crazy stuff. It was a culture shock, for sure.

I think that my experience there was really important in my development as a person because I experienced racism on the other side. My family was lower middle class, but I saw extreme poverty. I saw the disparity between public schools. Being on the sports teams and playing volleyball, we were wearing uniforms that had been at the school for ten years. They were nasty. At some point they were green, but I don’t know what color you could call them, maybe brown.

We practiced so hard and we would go to the Northside and we would play Northside Prep, which was all white, in a nice neighborhood, and all the girls would come out with matching spandex shorts, matching shoes, their hair in ponytails with the same ponytail holders. I just didn’t understand. I thought, “Why is everything so fresh and clean there?” I had to think and reflect and talk it through with my family.

I had been kinda sheltered. If you live on the Southside, you don’t leave the Southside, and you think that’s what the world is. And you go to other Southside schools and see, “Oh, they’re just like me.” That really impacted me and I think that made me really interested in psychology and sociology and economics and it drove me to think about urbanization. I studied all that in college. I just thought, this doesn’t make any sense. Why am I not getting the same opportunities because of where I live, because of my zip code? That’s lame. I think that really led me to want to teach.

I had the best education I could have gotten at my public school. I graduated with the International Baccalaureate diploma. I thought that I was killin' it. But I got to the University of Chicago and I’d never taken pre-calculus. I’d never taken physics. I didn’t know how to write a very good paper. I was so unprepared. Luckily, I was able to get through, but my first year of college was a mess.

I graduated from the University of Chicago in June of ’09. Then I didn’t know what to do with my life. NYC Teaching Fellows and Teach for America recruited pretty hard at U. Chicago. And it sounded up my alley. I was actually recruited as a Science Fellow because of my background in biology. But over that summer, I did a lot of soul searching and realized, “I really want to do special ed.” I switched and I loved it, it was perfect. It was a calling.

I taught in East New York over the summer and it was a baptism by fire, because it was summer school, it was an inclusive setting, it was in a sweaty basement. [Editor's note: General education and special education learners are mixed together in an inclusive classroom.] 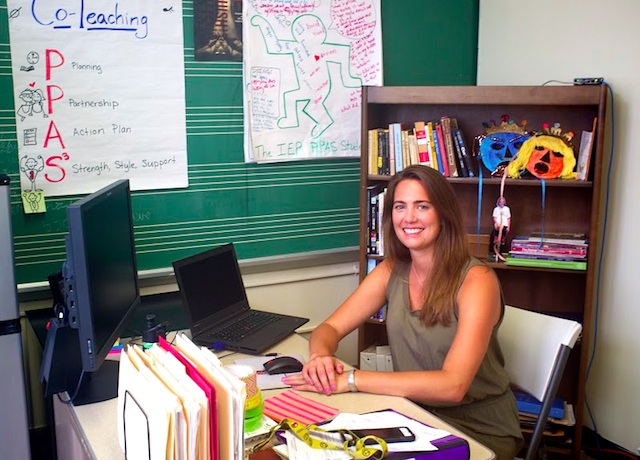 I taught at James Madison High School in Brooklyn for two years. They gave me teacher of the year, first year. It actually was a great thing for them to do because it made me work twice as hard. Then I had some family stuff I had to deal with, so I moved back to Chicago.

I think one of the bigger struggles of the job is actually working with adults. I saw that, a lot of the time, people have a particular way of doing things that may not work for every student every time. When I first started co-teaching, I had a lot of pushback. Here I was, 22, what the heck did I know? I would be teaching with these veteran teachers who had been teaching for ten years. Now that I’m at year 7, I realize that ten years does not make a veteran teacher.

In the beginning, you don’t really know what to expect. I’ll never forget my first observation, I had a fight break out. It was crazy. I just went up to the kid and said, “He’s going to use the blue crayon now, he will have it for five minutes, then he’s going to give it to you, and you are going to get it for five minutes. And that’s it, we are sharing, no nonsense.” I just stopped the fight, went right in there, cut it off. They were throwing things and fighting with each other and I came in and reasoned with them in such a way that was stern and clear and concise and my principal said, “That’s exactly what you are supposed to do.” That was in October of my first year.

I worked in Chicago for two years and I really, really loved it. But then I was in a relationship that I thought was going to lead to marriage, so I made the decision to come back to New York.

Then I came to my current school, which is an arts and performance school, which is totally different. I was really lucky because when I was moving here, they had just passed special education reform and were pushing for more inclusive classrooms, so I knew that coming to New York was going to open up job opportunities for me. I had tons of offers because everyone wanted a special ed teacher.

I chose my school because I thought it had such an interesting dynamic of combining academics with performing arts and letting the kids develop holistically by doing something that they really love. As a special ed teacher, I saw opportunities for students who wouldn’t normally have the opportunity to go dance at Alvin Ailey, act at Rosie's Kids and be in Ballet Tech. So many special ed kids are kinesthetic learners and good at these types of things but they often don’t get the opportunity to attend schools like this because academically they can’t get in.

It’s the same thing that happens with charter schools, the whole lottery system—you have to know to get into the lottery. We had to start seeking and recruiting special education students. It opened up opportunities for kids who didn’t even know that the school existed. Mark Twain, down in Coney Island, next to the projects, they send kids here now. Other schools in the Bronx, kids from Queens, we have kids that come from Staten Island, because the opportunity is so great. For me, it was so fresh and new and different. The kids really want to be here. I’m still working with low income students, students with disability, but they see this opportunity and they really want to seize it. It’s a shift in thinking.

Students come in at 8:15 and their academic day is done at 1:18. At 1:18, they go off into their respective performing arts. The performing art will count as their gym, their art and their electives.

It’s kind of a crazy schedule, because it’s boom, boom, boom, boom academics and then, they’re free to go dance and sing. There are only a couple performing arts schools. Here, they get paired with a professional program. LaGuardia has programs in the school. We are much smaller—we depend on our performing arts partners. There’s more opportunity our students because they already have a relationship with say, the ABA, and they could do well and be asked to join the company. A lot of the kids work too, so they have a lot to balance.