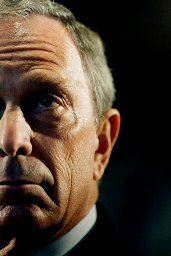 Mayor Bloomberg may be staunchly denying that he's running for president next year, but given the love New Yorkers seem to have for him, you can't blame him for high hopes. The latest Quinnipiac Poll says Bloomberg's approval rating is at 70%. This is down from his possible all-time approval ratings high of 75% at the start of the year, but it's still very high (back in 2003, his approval rating was around 33%).

The Quinnipiac Poll even included an open-ended portion of the poll, giving respondents a chances to say what they like and don't like about the billionaire mayor:

Looking at what they dislike about the Mayor:
- 17 percent say he's arrogant, cold and too rich to care about people;
- 16 percent disagree with his stand on issues;
- 11 percent say he's stubborn and opinionated, and too business-like

His arrogance, coolness and wealth aren't keeping most people from saying they would want him as mayor in 2009.