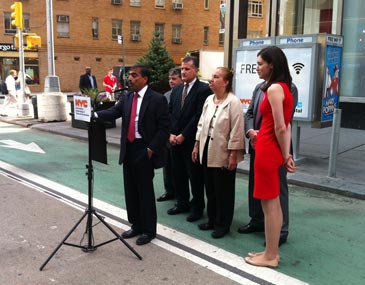 The first location is at West 58th Street and Broadway, near Columbus Circle in Manhattan. The kiosk will say "Free WiFi" on the sides (right now, there are no plans for advertising on the payphone kiosk, but there may be in the future). The other locations in the pilot are:

The goal is to get locations in the Bronx and Staten Island set up soon. The estimated radius of the signal is about 100-200 feet, depending on the location. The city hopes to spread the public WiFi throughout the city—there are over 12,000 payphones in about 9,000 locations. City Councilwoman Gale Brewer, who has previously chaired the Council's technology committee, pointed out that even though the city has been introducing more online access at schools, libraries and senior centers, they aren't open all the time, while this would give 24/7 access to free WiFi. 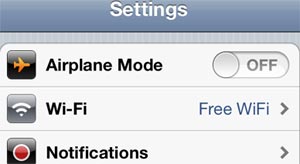 To access the WiFi on a device, you select the "Free WiFi" option. Then, after you've agreed to accept the terms and conditions, you're taken to the NYCgo.com website, the city's tourism arm, and then you've got free WiFi. A 5-minute YouTube video loaded pretty quickly—perhaps even more quickly than our home Time Warner Cable WiFi.

Merchant, who also announced the DOITT was issuing a RFI asking the public for feedback about what they want from NYC payphones (like would they want 311 services, etc.), did not believe the city's goal was make a profit on the venture, but rather to give a "service" to New Yorkers and visitors. Peter Izzo, senior operations executive at Van Wagner Communications, an outdoor company that owns many payphones, said the cost of installing the WiFi devices was about $2,000 per location, and that the maintenance and ongoing usage costs would be borne by them and other phone companies (a total of 13 companies, such as Van Wagner and Titan Outdoor, operate public payphones; the city regulates all of them).

When asked about crime and potential vandalism, Izzo said payphones were more likely to be damaged by graffiti or "a taxi careening into one" and that vandalism like a missing phone had dropped dramatically. He added that after decades of working with payphones, "you learn something."