Fashion—specifically daring hipster fashion, like tank tops or bicyclist gear—has been a controversial topic in ultra-Orthodox parts of Williamsburg. Now the city has decided to drop a lawsuit against Hasidic stores, opting to settle instead.

Store owners had put up signs forbidding scantily (or sleeveless) clad shoppers but the NYC Commission on Human Rights found the signs problematic and sued the stores. Then deputy commissioner Clifford Mulqueen said the signs, which refer to low-cut necklines, "are pretty specific to women. It seems pretty clear that it’s geared toward women dressing modestly if they choose to come into the store, and that would be discrimination." 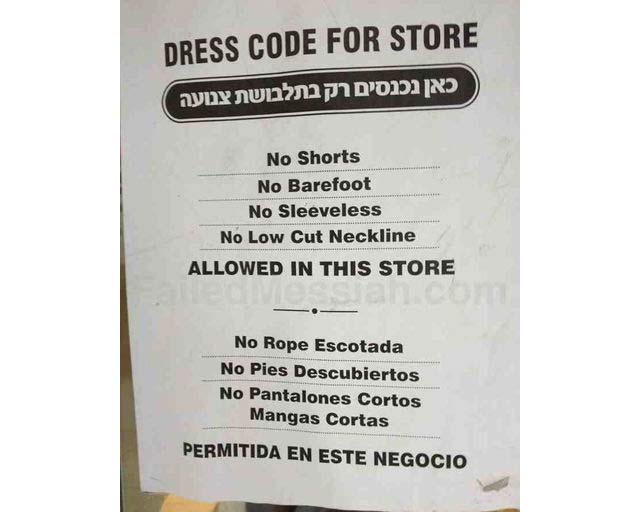 However, the stores argued they were gender neutral. Today, Yeshiva World News reports, "The commission decided to withdraw the lawsuit Tuesday after the city and representatives from the stores came to an agreement that if they were to post new signs in their windows, they would note that while modest dress is appreciated, all individuals are welcome to enter the stores free from discrimination."

HRC Commissioner Patricia Gatling said, "The Commission is satisfied that the store owners understand their obligations under the NYC Human Rights Law - the nation’s strongest civil rights law that protects those who live, work in or visit New York City from discrimination in employment, housing, and public accommodations."

The city had been trying to fine the businesses $7,500 (or $75,000, as the stores claim) but this settlement did not requires any payment of fines. A lawyer for the stores, Jay Lefkowitz, told the Daily News, “The shopkeepers always said that nobody was actually excluded from the stores. Any future signs will make clear that everybody is welcome, which was the reality."

But there is still a "modesty police" that enforces the dress code in the community.

#dress code
#hasid
#modesty
#modesty police
#ultra-orthodox
#williamsburg
Do you know the scoop? Comment below or Send us a Tip