The Department of Education on Tuesday released a long-awaited plan to address record racial and socioeconomic segregation in New York City public schools, setting new requirements for increasing enrollment at racially integrated schools; and reducing the number of schools with a disproportionate number of impoverished or wealthy students over the next five years.

The "Diversity in NYC's Public Schools" plan [PDF] was met with measured praise from education advocates and members of the City Council. Councilmen Brad Lander and Ritchie Torres, whose 2015 legislation required the DOE to publicize school demographics, described a "serious start to a decades-overdue effort."

But critics said they were hoping for a more radical plan to shake up entrenched segregation—a word that's notably absent from the DOE's "diversity" plan. The plan aims to increase enrollment at a third of the city's schools with relatively diverse student populations—schools where between 50 and 90 percent of the students are black or Hispanic—with controls that prevent them from tipping too far into racially segregated territory.

"I am really, really pleased to see specific benchmarks, and then I'm just horrified to see how low the bar is," said Maia Gelman, a parent at PS 75 on 96th Street and member of NYC Public School Parents for Equity and Desegregation. "It shouldn't be, 'We're going to tinker around the edges and see you in five years.'"

Gelman is pushing for 'controlled choice,' which would ensure an even distribution of high and low income, special needs, and English language-learning students across a given school district. Inroads have been made on the Lower East Side, but the push for broader implementation is absent from today's announcement.

Currently, the public school admissions process gives the upper hand to wealthier families, who have the means to rent or purchase homes in the most coveted school districts. Even families who don't live in coveted districts often find ways to avoid sending their children to low-performing neighborhood schools, according to a 2015 study by the Center For New York City Affairs at the New School.

Close to half of NYC public schools are at least 90 percent black and Latino, according to a recent WNYC analysis of city data. White students make up 15 percent of the total public school population, but a full third of them attend majority white schools.

"Relying on [traditional] zoning isn't going to get you there," Gelman predicted. "When there's a district that's super segregated, having a few schools that are diversified pushes segregation out into different schools." 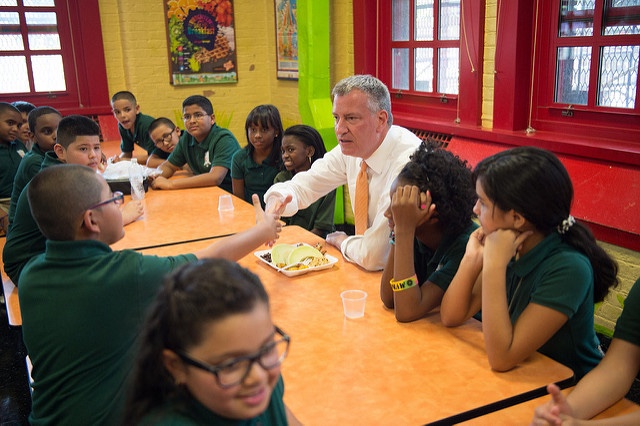 Under the DOE's new plan, the city will establish a "School Diversity Advisory Group" to review ongoing integration work, including the expansion of Diversity in Admissions pilots. Currently, 19 elementary, middle and high schools in NYC have DOE-approved enrollment requirements for ESL and free-lunch students.

The group will also consider a plan to phase out a middle school ranking system that has historically favored families with the time and resources to strategize. The DOE is looking to move all middle and high school applications online to even the playing field, and double down on a 2016 effort to increase diversity in NYC's specialized high schools.

The advisory group will make non-binding recommendations in 2018, according to the DOE. A spokesman for the DOE said that while controlled choice is not currently being considered on a city-wide level, the DOE would "consider" any plan presented by the working group.

"We haven't had a clear statement from the DOE before today about racially and socioeconomically diverse classrooms," said Halley Potter, a fellow with the Century Foundation who studies diversity in pre-k. "This makes a real commitment to moving the needle."

However, Potter cautioned that the new plan prioritizes "low hanging fruit," by focusing on schools and districts that have already expressed strong interest in desegregation, like District 13 in Brooklyn Heights and Cobble Hill and District 1 on the Lower East Side.

"One thing that remains to be seen is how much appetite the DOE will have to push forward [desegregation] in a case where there is not a clear consensus from families," Potter said.

For example, recent school rezoning battles in Brooklyn Heights and on the Upper West side have proven lengthy and contentious. While rezonings passed in both districts, early data from predominantly-black PS 307 in Brooklyn suggests that new families from predominantly white and wealthy DUMBO have not flocked to the school.

"We are sorry to see that the plan does not use the words 'segregation' and 'integration,' but instead sticks to the more anodyne 'diversity,'" Councilmen Lander and Torres cautioned. "We will not break the cycle of segregation if we cannot even name it."

Principal Jill Bloomberg of Park Slope Collegiate School is a longtime proponent of school integration. She's currently suing the city, alleging she's being unfairly investigated for her anti-racism agenda (demanding more sports teams for her predominantly black and Hispanic school, for example, and pushing back against the installation of metal detectors). She said Tuesday that DOE's evasion of "segregation" is telling.

"Integration is a policy specifically designed to fight racist inequity," Bloomberg said. "The goal should not be to add diversity as another benefit for a select group of students. Our goal should be to create schools so there is no school in the system that parents wouldn't want to send their kids to."

#diversity
#DOE
#integration
#school segregation
#original
Do you know the scoop? Comment below or Send us a Tip