For the second year in a row, the New York City Rent Guidelines Board voted Monday night to freeze rents on the city’s 1 million rent-stabilized apartments—a result that wasn’t enough for many of the more than 400 people who packed the meeting hall at Cooper Union, chanting loudly for a rent rollback.

The board voted 7-0 for no increase on one-year leases that are renewed for the year beginning October 1st, and for a 2% increase on two-year leases. The two landlord representatives both abstained.

Tenant representative Harvey Epstein had earlier proposed reducing rents by 4% on a one-year lease and 2% for two years. RGB figures showed owners' net operating income rose by 3.5% last year, the tenth straight year it’s gone up, he said. The board’s Price Index of Operating Costs estimate was 1.2% lower than it was last year, and according to Epstein, “not a single large landlord testified” at the five public hearings held before the vote.

Meanwhile, he continued, tenants are paying a higher percentage of their incomes toward rent than ever, 10,000 apartments were deregulated last year, 20,000 people were evicted—43% from rent-stabilized apartments—and 100,000 people stayed in city homeless shelters.

If landlords aren’t making a profit, Epstein said, they could apply to the state or city housing agencies to help. “They don’t do it because they don’t have any hardship,” he added afterwards.

The board rejected the rollback, 7-2, with no further debate.

“I think it’s inappropriate to base an unprecedented rollback on an aberrational cost factor,” RGB chair Kathleen Roberts said. The decrease in operating costs, she explained, came from a 41% drop in fuel costs. She said she opposed a larger increase because of “significant affordability concerns”: The city’s 2014 Housing and Vacancy Survey showed rent-stabilized tenants had a median income of $41,500 a year, and spent a record 36.4% of that on rent.

“We’re unhappy. A freeze is unacceptable,” J’Nell Simmons, head of LandlordsNY, a social network for property owners, said afterwards. The network’s 2,762 members own buildings containing about 750,000 apartments, she said, but many are “more akin to a mom-and-pop shop” and struggling. It’s “heartbreaking” to see people who can’t afford to stay in their apartments, she added, but rent stabilization is tied to the unit, not the person.

A LandlordsNY staffer said they “don’t have numbers” to discuss Epstein’s claim about hardship exemptions for owners. 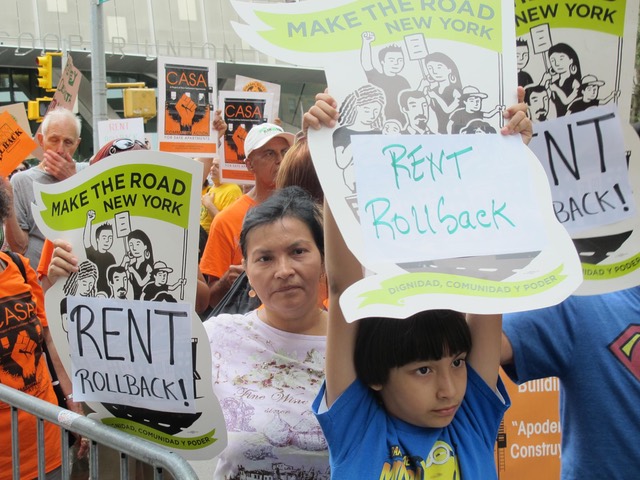 Owner representative Scott Walsh acknowledged the depth of the city's housing crisis, but said it could be better solved by measures such as a city rent credit of $300 a month for people who spend more than half their income on rent, expanding rent subsidies for the elderly and disabled, and freezing taxes and water rates retroactive to 2014—none within the RGB’s power to enact. “Rent stabilization is not an official affordable housing program, and owners still need compensation,” he said, proposing an increase of 3% for one year and 5% for two. The board voted no, 7-2.

“You don’t always get what you want, but you get something,” Epstein reflected afterwards. “A rent freeze will be great for millions of tenants,” he said, calling it a historic moment. “There might be less families that are going to be evicted this year.”

"This year, the facts demanded a rent freeze," Mayor de Blasio said in a statement. "More than a million people will now have more security and a better shot at making ends meet. And the financial health of our buildings will remain protected because declining fuel costs have offset other expenses. In short, tonight’s decision by the Rent Guidelines Board reflects what’s actually happening in our neighborhoods."

The more than 400 protesters who packed the hall kept a sing-song, call-and-response chant of “We Need a—Rent Roll Back” going for more than 10 minutes before the meeting started. They insisted that rents must be lowered because they’re just too high for people to live with.

“The working class cannot afford increases every year,” said Luis Tejada, director of Mirabal Sisters, a community organization in West Harlem and Washington Heights that brought more than 100 people in gold-and-green T-shirts down.

The RGB’s repeated increases during the Bloomberg era were particularly hard for old people, he said. While the rents paid by people who’ve been living in the same apartment for 40 years might seem low by current standards—$500 to $1,100 a month—they’re a huge bite out of a monthly $1,200 Social Security check. Almost two-thirds of the neighborhood’s elderly pay more than half their income in rent, Tejada said.

If owners can drive those tenants out, he added, they can get more than $3,000 once they renovate. Elderly immigrants—from the Dominican Republic, Mexico, Ecuador, and El Salvador—are particularly vulnerable to harassment, because they don’t speak English and don’t know their rights.

East Village resident Billie Madley, who's been living in the neighborhood for two decades, said she supported a rent rollback "because no creative people can live here any more. Those people made the East Village what it is. Regular families can't live here. It's become a very vanilla place." 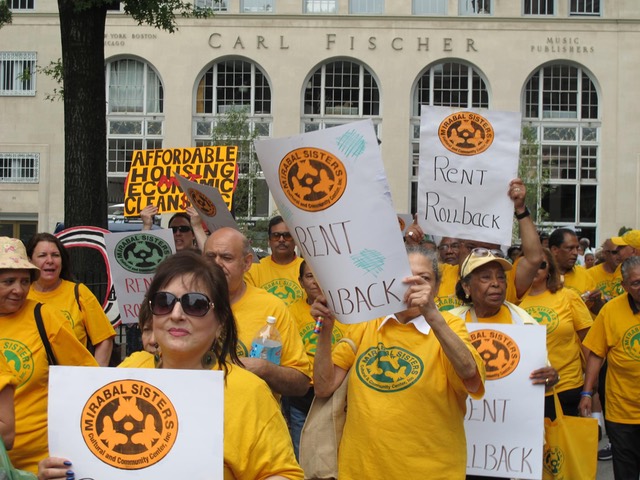 West Harlem resident Orlando Cotto, 32, was one of the first protesters to turn out, holding a “Rent Freeze” sign on the corner of East 7th Street and Cooper Square. “The landlord took away everyone’s preferential rents,” he said, beginning a rapid litany of his building’s grievances. “The ceiling fell on me. I got four screws and a metal plate. I’m on Social Security disability,” he added, pulling up his pants to show the scars on his right ankle.

Cotto, who was then a customer-service agent for a car and limousine service, has been battling with his landlord ever since he moved in four years ago. The owner claimed that the legal stabilized rent was $1,820, but told Cotto he’d give him a “preferential rent” of $1,309. But after four years, the owner ended the discount, jacking the rent up to $2,000. Cotto filed an overcharge complaint with the state Division of Housing and Community Renewal, and found that the previous tenant had been paying $1,176. The landlord claimed the increase was justified because he’d done $27,000 worth of renovations, but according to court papers filed by Cotto’s lawyer, there were bedbugs, leaks in the kitchen and bathroom ceilings, and “nothing in the apartment looked newly renovated.”

On June 6th, the state agency lowered his rent to $1,285. Others in the building have similar issues, he said.

Assemblymember Linda Rosenthal (D-Manhattan) testified in favor of a rent rollback at one of the RGB’s public hearings. Landlords have been getting “unjustified rent increases for years,” she said before the vote. During the Bloomberg administration, the board gave increases as high as 7.5% and 8.5%, and now, “it’s time to pay tenants back and give them a break.”

“Once you pay your rent, you don’t have any money left for anything else,” said Ruth Riddick, a retired corporate trainer from Flatbush.

In East Harlem, many tenants spend 70% of their incomes on rent, said Pilar de Jesus, a paralegal who worked in a combination legal clinic and food pantry there last year. Her clients “were also there to get food,” she says. “They couldn’t afford to buy food because their rent was too high. These people are human beings, not commodities.”

Eva Brown, a retired medical salesperson from Clinton Hill, was happy with the result. “After eight mayors and 46 years, Mayor Bill de Blasio gave us a rent freeze,” she said. “Thank you, Mr. Mayor.”

“This year, given the data, we really wanted a rent rollback, in the interest of justice,” said Wasim Lone of Good Old Lower East Side. “Politically, it wasn’t going to happen. We’ll come back next year. The struggle continues.”

#affordable housing crisis
#rent freeze
#rent guidelines board
#rent stabilization
#original
Do you know the scoop? Comment below or Send us a Tip