As Albany refused to take action on New York City's expired rent laws (to say nothing of the MTA's capital budget), Governor Andrew Cuomo was scheduled to appear at a $2,500-a-head fundraiser at the Plaza Hotel yesterday evening. But a few hours beforehand, his communications director announced that he'd be skipping his own party to stay in Albany.

That (and a five-day extension of the existing rent laws) didn't stop a crowd of angry protesters from picketing the Plaza yesterday evening to punish the Governor for fiddling while New York's rent protections burn.

"I'm here because of the rent," said Margie Trisbend, a 70-year-old Bronx resident. "For years, I was paying $723. Last month, it went up to $1,574. If I can't afford my rent, where am I going to go?" Trisbend was skeptical of Cuomo's commitment to renters. "He's not acting in good faith," she said. "He's acting in favor of the landlords."

In recent days, Cuomo has said that he is willing to strengthen rent protections—but only if the legislature agrees to a tax incentive that shunts public money into private schools, a plan his critics point out is especially attractive to the billionaires who donate to his campaigns at events like yesterday's.

"He wants to take money from the poor and give it to the rich," said Everett Stembridge, 57, a Harlem parent of public high school students.

"Our public schools are underfunded. We need money," said Mindy Rosa, a public school teacher. "Why should I pay for private schools, pay for charter schools, when my schools don't have our resources?" 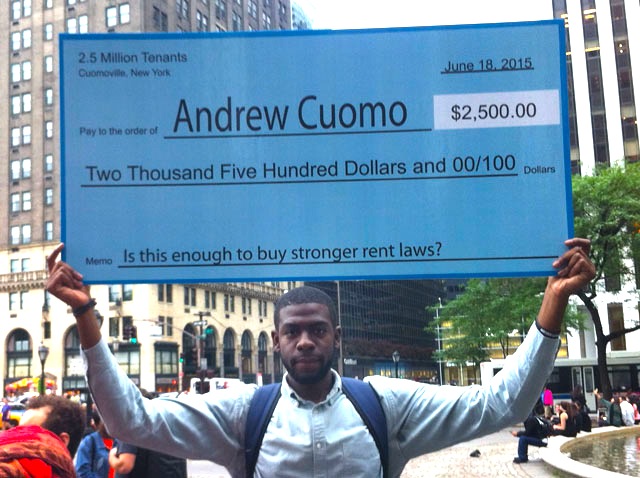 "Unless we're sitting down at $2,500 a plate, nobody seems to be listening to us," said Esteban Giron, a member of the Crown Heights Tenants Union. Fortunately, he said, the demonstrators had brought poster-sized checks to present at the fund-raiser.

Police and hotel security denied entrance to the protesters, however, and they had to content themselves with picketing outside the main entrance. They had little interaction with the fundraiser's attendees, though at one point former Governor David Paterson inadvertently stumbled into the middle of the protest before his handlers extricated him and helped him into a black BMW.

Jean Folkes, a 73-year-old member of the Flatbush Tenant's Association, who has lived in her neighborhood since moving to the country in 1969, wanted to speak directly to the Governor. "Cuomo, where is your humanity? Did money eat your humanity?" she asked. "We have elephant memories. We'll see to it that you lose if you run again. Enjoy your last two and a half years in Albany, if you're not indicted before then."