Hundreds of tenants left the Great Hall at Cooper Union disappointed after the Rent Guidelines Board made their final decision to increase rents for rent stabilized apartments, lofts, and hotels on Wednesday night.

Tenants had been arguing for a rent freeze, while building owners and landlords were hoping for a 4.5% increase, which partially reflects a 4.5% jump in operating and maintenance costs for rent stabilized buildings, per the RGB 2018 Price Index of Operating Cost (PDF).

Bushwick resident Gladys Puglle, a 55-year-old mother of three, said she struggles to pay her rent and feels obligated to sublet a room in her apartment. "Enough is enough, we need the rent freeze. So that we can keep up with our apartments and not try to keep up with the raise of the rent, raise of our food, raise of our clothing and no increases on our jobs," she said.

"The balance that we're trying to strike is an increase level that allows landlords to maintain and keep up their buildings and that it's an attractive enough investment for them to keep as oppose to sell," argued RGB Owner Member Angela Pinksy, who voted yes to the rent hike and was booed during her vote repeatedly.

Before the vote, rent-stabilized tenants and advocates from organizations such as RENA, Fast Food Justice, Mirabal Sisters Cultural & Community Center, Crown Heights Tenants Union, and Make The Road blasted the burden a rent hike can have on them and demanded rent freeze this year. The howling of whistles and people chanting "The rent goes up and up. The neighborhood suffers, suffers," in Spanish permeated the room. 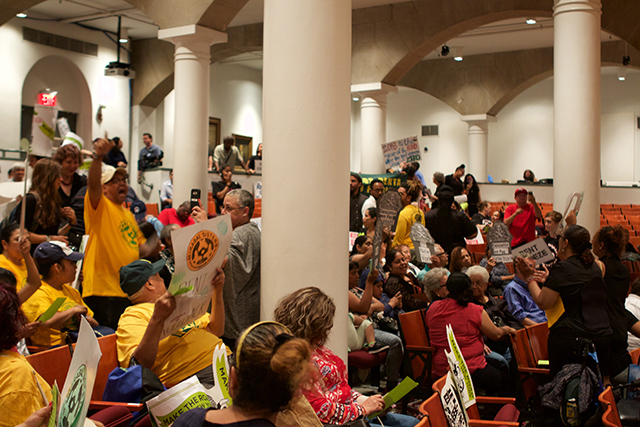 The room then jeered board members as they left the stage after the tally. RGB Tenant Member Leah Goodridge felt that the final verdict did not reflect the struggle of New York City tenants. She claimed the board argued rent freeze hurts the profits of landlords but that data shows otherwise.

Kelvin Rojas, 22, who has lived in Central Harlem his whole life, expected the hike but believes it will not only affect stabilized tenants but many others as well. "This is going to create a snowball effect in terms of mass gentrification," predicted Rojas. "It's going to lead to the misplacement of a lot of rent stabilized tenants because the landlords are going to be displacing people and that's going to permeate."

Although some felt defeated last night, RGB Tenant Member Sheila Garcia believes the fight is not over for rent-stabilized tenants. "Tenants are going to continue to organize. People have meetings every month to strategize and look at data and push the board to make the right decision next year," said Garcia.

#gentrification
#real estate
#rent guidelines board
#rent stabilization
#rent stabilized apartments
#original
Do you know the scoop? Comment below or Send us a Tip