On the Twitter feed of the Sergeants Benevolent Association, New York City's second-largest police union, "Ferguson Missouri was a lie," Bronx DA Darcel Clark is "STUPID," and "Members of law enforcement have become the targets of racism: Blue Racism."

"Imagine Deblasio [sic] in the White House. We will ALL be HOMELESS, TRANSPORTATION will come to a stand still, he will build a HUGE PRIVACY FENCE around the Rose Garden & be LATE to the State of the Union while he goes to the gym," the Sergeants Benevolent Association recently tweeted. "The US will be flying a white flag from the Capital [sic]."

But a tweet sent on Sunday conflating congestion pricing and "quality of life" crimes may have gone too far, even for the SBA. (We've blurred out the most graphic portion of the video still.) 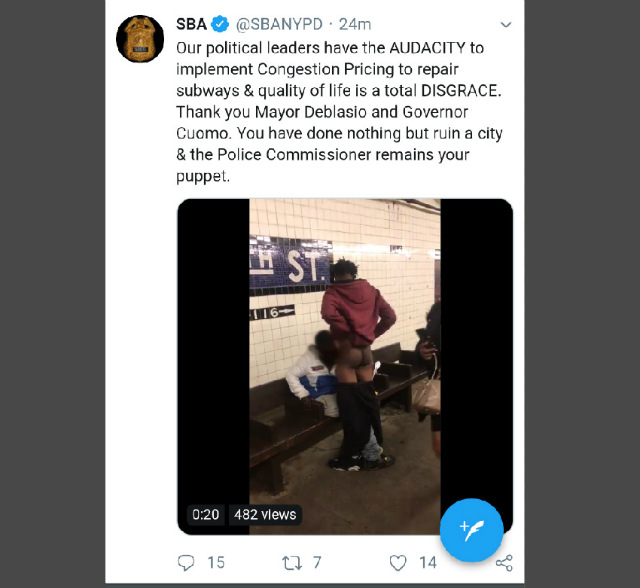 The tweet itself is gone, but the replies remain.

Obviously, I am going to report this video. Posting it is actually a crime. Cops should know better. I am try at all times to respect and to be supportive of police, police unions, and organized labor.

You should be ashamed of posting filth like this.

A spokesperson for the SBA, which represents around 13,000 current and former NYPD sergeants, did not return multiple requests for comment.

In 2015, the SBA asked its members to send them photographs of "the homeless lying in our streets, aggressive panhandlers, people urinating in public or engaging in open-air drug activity, and quality-of-life offenses of every type."

The campaign was called "Peek-A-Boo, We See You Too."

And last year, the SBA sent a series of angry tweets after the Civilian Complaint Review Board reminded New Yorkers of their Fourth Amendment right to be free from unreasonable search and seizure.

You are all a disgrace. You sit on your ass and target the NYPD all while growing up on the nipple of what’s easy. You have no clue what a NYPD officer does yet target us and disparage our integrity. One day you will dial 911 when evil is at your door and thank god for the NYPD. https://t.co/8I00FD7hny

"The heat and energy in the Democratic Party may be with the young activists driving the political media maelstrom the chattering class obsesses over, but there are vast parts of New York City separate from that self-referential space that, speaking plainly, are getting screwed here."

Half of the 35,000 uniformed NYPD officers live in New York City. The congestion pricing plan that passed the state legislature this spring would only apply to drivers attempting to travel below 61st Street in Manhattan.

An astute observer once referred to Mullins as "an anthropomorphic Big Mouth Billy Bass who will say bad things about [Mayor] de Blasio whenever you press a button on his wall mount." But there's at least one recent instance in which the SBA agreed with the "scarecrow in need of a brain."

#nypd
#police
#Sergeants Benevolent Association
#social media
Do you know the scoop? Comment below or Send us a Tip
A new Gothamist is coming! We’ve moved comments over to our beta site. Click here to join the conversation and get a preview of our new website.