Last November, Kaji Douša, the senior pastor at Park Avenue Christian Church, traveled to Tijuana to meet with and assist members of the “migrant caravan,” thousands of people who had traveled from Central America to the United States’ southern border with the intention of claiming asylum. Douša was part of the “Sanctuary Caravan," a project that connected faith leaders with asylum-seekers in an effort to help guide them through the asylum process.

Douša knew her work would be at odds with the Trump administration’s “zero tolerance” approach to border crossers, as well as its continuing harassment of people intending to apply for asylum. But she never imagined that she would be placed on a secret government list that made her the subject of a lengthy interrogation, as well as flags on her travel documents that could limit her travel outside the U.S.

Last Wednesday, NBC News in San Diego revealed that it had obtained a secret document containing the names of 59 individuals that U.S. Customs and Border Protection had targeted as part of Operation Secure Line, a "national security investigation" launched by the Trump administration in the run-up to the 2018 midterm elections. According to the document, these individuals were “suspected organizers, coordinators, instigators and media” that CBP was interested in interrogating to determine who was behind the thousands of asylum-seekers that had made their way to the southern border.

After seeing initial reports about the list, Douša called Nicole Ramos, a Tijuana lawyer with whom Douša’s group had closely worked. Ramos had been on the list and had her travel to and from Mexico limited. Douša had originally planned on calling to express her outrage that Ramos had been placed on a watch list by her own government. When she got through to her, however, she received unexpected news.

“She told me that she was appreciative of my support and devastated by all this, but wanted me to know that I was probably on there, too,” Douša told Gothamist.

Douša had quickly scanned the list (NBC San Diego had redacted the names and blurred the photos of those people they did not obtain consent from) and saw a photo she thought might be her, but her haircut didn’t quite match. She quickly called emailed the NBC journalists in San Diego, and within what felt like “two seconds,” she said, they emailed her back and confirmed it, sending her the unredacted photo with a yellow X across her face. 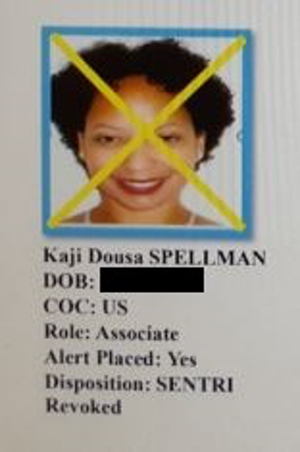 Entry of Dousa on the CBP's database of lawyers, journalists, and organizers. (Courtesy Kaji Dousa)

The X signified that she had already been interviewed, and that some action had been taken to limit her travel. While Douša had passed through the port of entry multiple times between November and December, she was only stopped and interrogated by CBP once, during her final time crossing the border on January 2nd.

During that crossing Douša was interrogated for ninety minutes, and for much of that time she was denied a phone call to let her husband and daughter, who were on the other side of the border, know where she was and what was happening.

“I had a friendly conversation with the CBP agent who received my global entry card, which, again, means I’ve passed a certain level of scrutiny, right?” said Douša. “Background checks and so forth with the U.S. government. Eventually he said he saw that my photo had crosshairs over my face and told me I had to go to this room.”

Douša continued, “I kept asking them, ‘Why am I here? Can you give me any information?’ and they kept saying ‘no.’ They were very, very rude to me. ... They pretended I wasn’t even there.”

Initially, Douša said, the CBP agent asked questions that seemed very simple and easy to answer. In hindsight, however, she decided he was trying to establish whether she would lie or not, because it appeared that the agent had the answers right in front of him. Soon, another agent began interrogating her about who she was working with in Mexico, to whom she spoke, and what groups she was associated with. Douša said she didn’t give very direct answers, and soon turned the tables on the agent.

“I said to him, ‘Listen, I don’t think the policies you enforce are just and I’m trying to help you get sleep at night,’” Douša recalled. “I told him, ‘I realize that most of you have been here long enough that you didn’t sign up for what you’re being asked to do right now.’”

The CBP agents continued to press Douša and asked why she was “working with the caravan,” which she denied doing. Instead, she told them that she was working with individuals who “have very valid asylum claims,” who were trying to cross into the country, ”which is their legal right.”

Douša has not tried to cross back into Mexico since her interrogation. According to the documents, her “Global Entry” pass for expedited crossings, which on the border is referred to as a SENTRI pass, has been revoked, and an alert has been placed on her passport. These alerts have also been placed on the passports of other journalists and immigration attorneys, and been used to bar them from entry to Mexico by Mexican authorities. Though passports are issued by the State Department, SENTRI revocations are handled by CBP, which has a policy of not addressing specific reasons why a SENTRI would be revoked for an individual.

Douša, who told Gothamist in November that she had been inspired by “Christ’s time as a refugee” to go help at the border, remains unfazed by the surveillance she and her group have come under, both at the border and in New York City. Last week, emails revealing ICE agents closely following the communications and actions of the New Sanctuary Coalition (which launched the Sanctuary Caravan) were published by the Nation. In the past, ICE has been seen closely surveilling the group’s headquarters at Judson Church.

“Seeing the evidence right now was both affirming in the sense that we had suspected things, but also crushing in that the government should be on my side. I’m trying to protect what so many of the people who work for the government signed up for,” Douša told Gothamist. “They need us to be the moral voice that says, ‘No, you should be able to think what you think and say what you believe.’ I don’t even have that right anymore. I possibly can’t even travel outside of the country.”

#immigration
#trump administration
#longform
#original
Do you know the scoop? Comment below or Send us a Tip