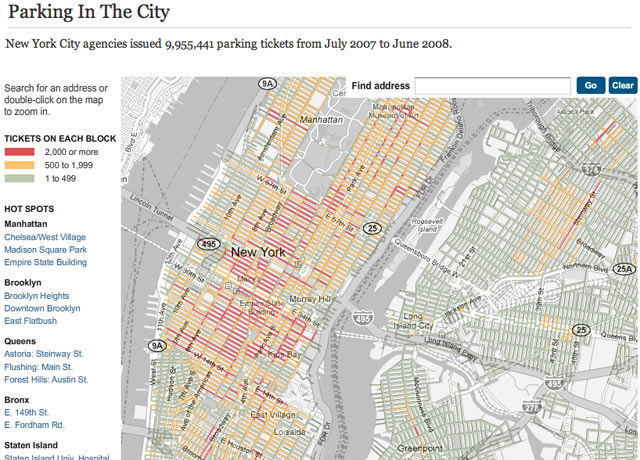 Drivers, it's the last Friday in November—do you know where your car is? The day after Thanksgiving was the most-ticketed day of the last fiscal year, according to an extensive analysis of parking tickets conducted by the Times. The study concluded that parking tickets issued citywide have surged 42 percent since Mayor Bloomberg took office. During the last fiscal year, the city raked in $624 million in parking fines, which is more than the city spends to run the entire Department of Transportation. Officials, maintaining a straight face, insist the parking enforcement is not driven by revenue goals.

According to the study, which comes with a sweet interactive online map, the most-ticketed block in NYC is 14th Street between Seventh and Eighth Avenues. 10 percent of the tickets for alternate-side parking violations were issued within two minutes of the time that the rule went into effect. And 28,000 of those—2 percent of the total—were issued exactly on the hour. Gus Markatos, manager at the Donut Pub on West 14th Street, tells the Times, "I walked out at 11 o’clock on the dot one night, and my car was already being ticketed and towed. There’s no courtesy anymore."

The NYPD insists the handheld computers issued to traffic cops are synced with the atomic time clock, but a Fox News report found that some of the devices run more than two minutes fast. Last May, 64-year-old Leo Magnotta died from a heart attack while arguing with traffic cops in the Bronx, sparking protests from business owners about overzealous ticketing. And southwest Brooklyn Councilman Vincent Gentile complains that, "We have traffic agents who get bused in by van each and every day to these communities. They’re deployed like an army regiment."

But it's tough out there for the enforcers, too; former union rep Robert Cassar tells the Times, "Every day, you go out there naked—without a gun—in the back of your mind is, ‘Is this my day?'"

#bronx
#brooklyn
#city
#cops
#map
#mayor bloomberg
#most tickets
#new york
#nyc
#nypd
#nytimes
#parking
#protest
#study
#tickets
#times
#too many
Do you know the scoop? Comment below or Send us a Tip