NYC Observes The 16th Anniversary Of The September 11 Attacks

Today, New York City remembers the thousands of people killed on September 11, 2001. The names of 2,983 people—the victims who died in a crash in Shanksville, Pennsylvania, the Pentagon and the World Trade Center, plus the six victims from the first World Trade Center bombing on February 26, 1993—will be recited today by family members of victims at the 9/11 Memorial Plaza.

There are six moments of silence: Two for when the planes hit the towers, two for when each tower fell, one for the attack on the Pentagon and one for Flight 93, which crashed in Shanksville.

The four-hour ceremony begins before 8:45 a.m. and will be live-streamed here:

(Houses of worship will toll their bells throughout the city)

Families of victims of 2001 and 1993 attacks will begin reading the names in pairs.

9:37 AM Moment of silence (observance of time American Airlines Flight 77 struck the Pentagon)

9:59 AM Moment of silence (observance of time of fall of the South Tower)

10:28 AM Moment of silence (observance of time of fall of the North Tower) 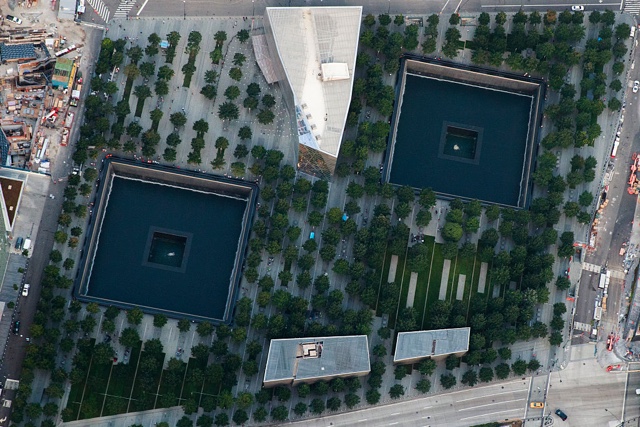 The 9/11 Memorial Museum will be open for family members only, beginning at 7 a.m.

The World Trade Center Transportation Hub oculus will open its roof to honor the victim so the attacks.

Tribute in Light will return tonight. The lights will go on at sunset (7:11 p.m.) and will fade away at dawn.