NYC Murders, Robberies Slightly Up in 2008; Other Major Crimes Decline 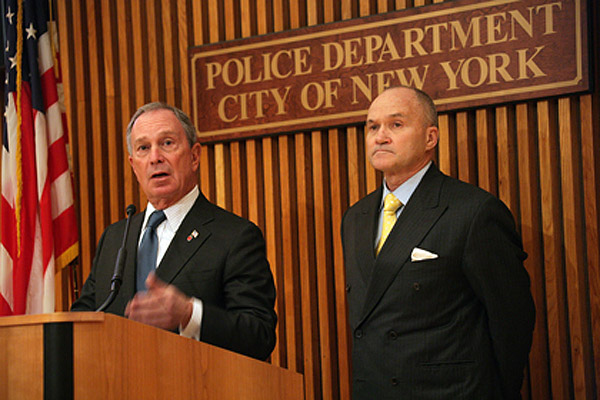 Last week, Mayor Bloomberg and Police Commissioner Ray Kelly announced that, overall, the city was on course for another year of declining crime, even in spite of the economic slowdown. Major felony crime fell 4% this year versus last and 30% versus 2001 (see chart, from the city, below). However, robberies were up 2% vs. 2007 (but were down 21% vs. 2001) and murders were up 5% (but down 21% vs. 2001). 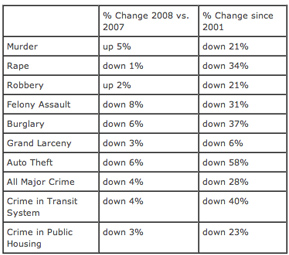 Last year, there were 496 homicides--the lowest since records starting being kept 45 years ago-- and this year is expected to be the second lowest year (there were 502 by 5 p.m. on Tuesday). Mayor Bloomberg said, "Before 2002, the City had never recorded fewer than 600 murders a year - but now we'll do it seven years running. The continuing reduction of crime is a testament to the quality of our police force - the finest in the world - and to our determination to find innovative ways of turning up the heat on criminals."

Commissioner Kelly touted the Real Time Crime Center--which conducts rapid analysis of crimes-- and a 40% drop in transit crime since 2001. However, yesterday the Post reported that an NYPD transit unit that "guard[s] the subways at night" will be closed "with its 48 officers merged into the borough's two Transit Districts." The Post added, "Queens subway crime rose 6.2 percent this year, with 308 incidents through Dec. 21 as opposed to 290 incidents in the same period last year."

The future, though, is causing worries, what with the city's impending budget issues and budget reductions for the NYPD (which are prompting reductions in the forces and number of recruits) as economic difficulties continue. Police historian Thomas Reppetto tells the Daily News, "The police have continued to hold the line with fewer officers and working against very low numbers. What I'm worried about is a tipping point. It could result in a serious escalation."

The NY Times reports how the NYPD's Operation Impact, a 2003 initiative which deployed cops in areas with a "greater propensity for crime during certain hours and days," has cut crime in many areas. However, while guns are being used less, "the number of people killed by knives or other sharp instruments spiked, to 123 from 76 last year." One resident in the 75th Precinct (East New York in Brooklyn) told the Times, "It probably is more safe, but everyone still does the same things. It hasn't stopped the people in my building from selling drugs."