NYC May Ban Use Of Wild Animals For Entertainment

This city, perhaps more than just about any other city in the world, is a city comprised of indoorsmen. Yes, many of us head upstate from time to time to brave the harsh sunlight and the deafening roar of crickets in order to feel like real, red-blooded Americans, but we all know, deep-down, that we are imposters. We don't pay exorbitant New York rent to spend time outside, especially now that Pokemon Go mania seems to have ended. We are city people. As such, most of us don't know a thing about wild animals. Are they friends? Enemies? A new kind of designer dog? Can we pet your wombat?

Thankfully, our government has stepped in to minimize our exposure to the increasingly untamable animal kingdom.

First, on Thursday the New York City Council Committee on Health held a hearing on a bill that would ban "wild or exotic" animals from performing in public for "entertainment or amusement." The bill, sponsored by Rosie Mendez, a Democrat representing the East Village, contains exceptions for "accredited zoos, research facilities, religious ceremonies or celebrations, and educational or conservation-related programs or presentations." That leaves circuses which use such animals, and the Ringling Bros. Circus said it would no longer perform in New York City if the bill passes.

“If this bill passes, Ringling Bros. & Barnum & Bailey will not come back to New York, period,” Stephen Payne, spokesman for Feld Entertainment, Ringling's parent company, told the NY Post. “We have no plans at this time to remove any other animals from our show.”

It's a tough time for any form of entertainment that was born in the days before radio, but it's an especially tough time for circuses. The non-profit Big Apple Circus—which only used dogs and horses in its performances—folded earlier this year . Ringing Bros. and the Universoul Circus are routinely targeted by protesters over their alleged mistreatment of animals.

Ringling retired its elephants in May, so it's just big cats that the bill targets. The bill's sponsors worried about the treatment of lions and tigers, claiming that a touring performance schedule was inherently cruel.

"Keeping exotic animals in captivity, transporting them around the country and requiring them to perform tricks night after night for human amusement, in my view, is inherently inhumane," said Corey Johnson, chairman of the council's Health Committee.

Alex Lacy, the circus's big cat trainer, told CBS 2 "the health and well-being of my animals is my top priority every single day."

The mayor's office supports the bill, and City Hall is also trying to keep us away from deer and coyotes. The de Blasio administration unveiled a new wildlife education and awareness campaign today. NYC Wildlife is being launched in response to increased deer and coyote sightings in the city, mainly in Staten Island. 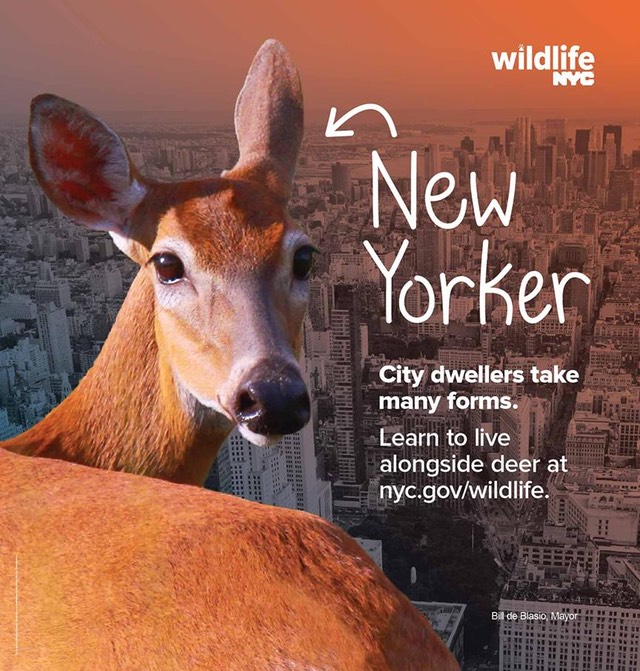 "Recent sightings of deer, coyotes and other unexpected animals make it clear that New York City can be a wild place," Mayor de Blasio said in a statement. "WildlifeNYC’s emphasis on education, outreach, and humane population control will help all New Yorkers care for our urban environment - and the animals who share it with us."

The campaign will feature ads in subways and buses with adorable looking deer dubbed "New Yorkers," with captions like "City dwellers take many forms." The ads then direct residents to go to the campaign's website to "learn to live alongside deer." The lesson the city wants us to learn is pretty simple: stay away from them, and let the city do its job, which is sterilizing these wandering speed bumps en masse.

The city launched a program in September in which teams working at night are "capturing, sterilizing, ear tagging and radio collaring deer across Staten Island," according to the Wildlife NYC website.

The city said that an aerial survey of Staten Island in 2014 established a minimum population count of 763 deer over 18.7 square miles.

Lyme disease aside, deer are cute enough to make good models for advertisements, while coyotes, which the program also addresses, do not. A series of coyote sightings last spring was among the first signs that our concrete jungle had not insulated us from the natural world as we had believed.

"Keep coyotes wary," the NYC Wildlife website advises. "If you are approached, make yourself look bigger by putting your arms up, and make loud noises until the coyote retreats. Appreciate coyotes from a distance." Sure, but what we really need is an ad campaign reminding coyotes to keep their distance from us.