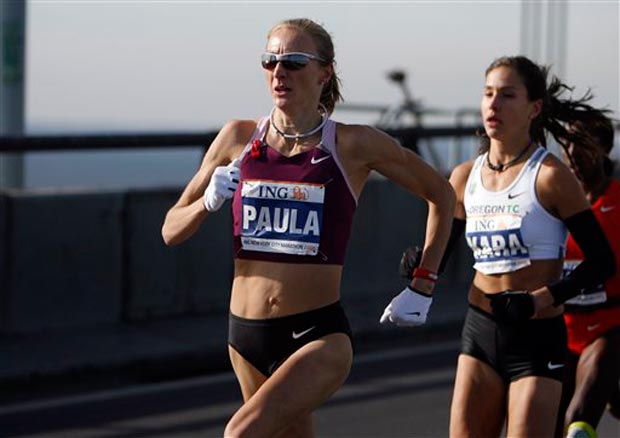 On a very windy day, Paula Radcliffe, last year's ING NYC Marathon winner, won the women's race today with a time of 2:23:556. Radcliffe had looked to the NYC Marathon as her redemption, after a stress fracture earlier this year and a 23rd place finish at the Beijing Olympics. Second place winner was 40-year-old Ludmila Petrova, the 2000 winner, at 2:25:43

Kara Goucher finished third (2:25:53), the first American woman in 14 years to place in the marathon--and this was her very first marathon. Goucher was born in Queens, but her family moved from New York soon after her father was killed by a drunk driver in 1982. She told the Daily News her mother and sisters would be cheering for her, "This is a very big deal for my family, a lot more so than the Olympics. It's where we were all born and grew up and began our lives together. Just knowing that they're here kind of makes everything more complete for me."

Gomes dos Santos said the crowds in Central Park really inspired him to keep going and to overtake the lead at Central Park South. Check out the NY Times' blog about the men's race.

If you want to share your marathon photographs, you can email them to photos(at)Gothamist(dot)com or tag them "gothamist" on Flickr.