City Hall is slowly starting to invest in an affordable housing model that can permanently remove parcels of land from the speculative housing market in rapidly gentrifying neighborhoods.

Late last month, the Department of Housing Preservation and Development announced it's distributing a $1.65 million grant to "create and expand" Community Land Trusts in the five boroughs. A CLT is a nonprofit that acquires and manages land, and empowers the tenants or homeowners who occupy units on that land to jointly set the terms of its use. Most CLTs mandate that buildings under their control cannot be sold for profit.

"Four years ago, politicians were saying this was a pipe dream. And then fast forward, because we organized, look where we are today," said Ryan Hickey, a lead housing organizer at Picture the Homeless and New York City Community Land Initiative board member.

Supporters of the CLT movement say this modest investment is NYC's largest commitment to date to a housing model that diverges dramatically from the guiding principals of Mayor Bill de Blasio's affordable housing plan. City Hall has enlisted major for-profit developers to help build and preserve 200,000 below-market rate apartments over a span of ten years, but the majority of these apartments will be too expensive for many New Yorkers. Affordability agreements come with expiration dates, and are marshaled in with large-scale rezoning debates that have left long term residents from East New York to East Harlem feeling more vulnerable to gentrification. A major tax break incentive for developers, considered central to de Blasio's model, costs NYC more than $1 billion annually in foregone tax dollars.

By contrast, CLTs have the potential to keep rents deeply affordable across generations, albeit on a small scale, and empower low-income residents. To date, New York City has a single hard-won model: the Cooper Square Mutual Housing Association, established in 1994. There, tenants living in separate apartment buildings cross-subsidize their rents and pool their utility and maintenance costs to save money.

Hickey says the options are limitless, and extend beyond residential buildings. If a CLT acquires vacant land, it might stave off rent-hiking byproducts of gentrification like bars and coffee shops. "You can go through a larger community visioning process of, 'Oh man, we're really low on laundromats, or community recreation centers,'" he explained. 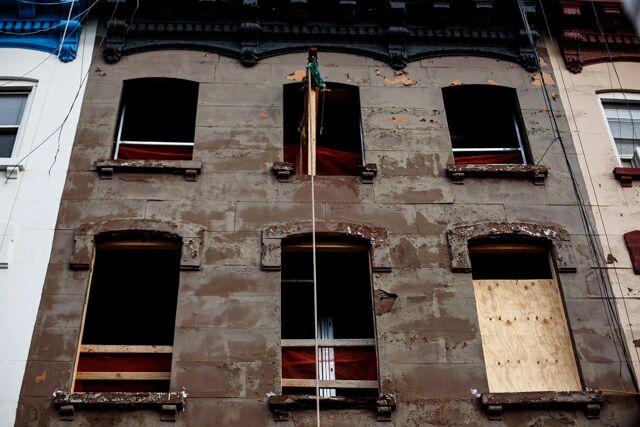 A vacant Crown Heights building in the tax lien sale. Advocates say properties like this one could be ripe for CLT development. (Scott Heins / Gothamist)

The 2017 CLT funding comes out of a $3.5 million pot of bank settlements negotiated by Attorney General Eric Schniederman, and divvied up by nonprofit Enterprise Community Partners. The balance will go towards CLT initiatives in Albany, Suffolk County and Nassau County.

"I don't think anyone, HPD and Enterprise included, would say the funds are enough to cover actual development costs," said Deyanira Del Rio, co-director of the New Economy Project and board chair of the New York City Community Land Initiative, which will use the funding to train grassroots CLT groups. "The idea seems more to jumpstart the field and to support a handful of CLTs that are in operation or close to it."

"The question now is how do we support these groups so they can do the organizing they need to do," she added. Del Rio's group plans to give special attention to a handful of community groups from Chinatown to East New York to the South Bronx that are eager to preserve extremely low-income rental housing, but are in the early stages of CLT organizing. Governing structures must be established from scratch, often to fix up and manage properties in serious states of disrepair.

The newly-formed Interboro CLT, a coalition of established nonprofits including the Center for NYC Neighborhoods and Habitat for Humanity NYC, plans to focus on affordable home ownership in southeast Queens, Edgemere, and central Brooklyn. The group hopes to eventually rehab vacant properties and build on vacant lots, according to CNYCN spokesman Cristian Salazar. He sees HPD's CLT grant as an indicator that the city will work with CLTs in the future, possibly prioritizing them for plots of vacant city-owned land.

Federal, state and city subsidies typically cover between 60 and 70 percent of the renovation costs for any nonprofit building. (HPD did not immediately respond to an inquiry about whether the city plans to put its own funding towards CLTs, specifically.)

The East Harlem / El Barrio CLT plans to put its slice towards rehabilitating three buildings in that neighborhood, —with additional rehab funds from City Council Speaker Melissa Mark-Viverito—while the Cooper Square CLT plans to expand by acquiring nearby distressed buildings.

But Del Rio says a true CLT foothold in New York City will be contingent on continued policy work and, ultimately, "a pipeline of properties into the program."

For example, Public Advocate Letitia James has proposed an overhaul to the annual tax lien sale, where the city sells off the right to collect outstanding fees on thousands of properties to a private trust managed by the Bank of New York Mellon. The current scenario leaves properties ripe for speculative flipping, according to critics. A preservation trust could purchase the debt on some of the buildings in serious disrepair and work with building owners (or, in a foreclosure situation, nonprofit developers) to establish CLTs.

Rockaways Councilman Donovan Richards has also put in time educating his colleagues on CLTs, and recently introduced legislation to add the term Community Land Trust to the city's administrative code. "A lot of people don't understand what a CLT is," Richards told Gothamist in April. "They haven't heard of it." Still, July's funding announcement came with endorsements from Chinatown Councilwoman Margaret Chin, Mark-Viverito, and Manhattan Borough President Gale Brewer.

"We've always said CLTs are not the magic bullet to the affordable housing crisis," said Hickey, of Picture the Homeless. "But we do think this is a very good tool to keep people in their homes, stem gentrification, and have community control over housing."

"Cooper Square saved hundreds and hundreds of tenants while that neighborhood was being gentrified to next Tuesday," he added. "If we could do that all over the city, we could prevent a lot of pain and violence against low income communities. Even if it's not going to save the whole city, it's worth fighting for."

[Update 3:30 p.m.]: HPD spokeswoman Juliet Pierre-Antoine did not confirm or deny plans for future CLT funding, but described this program as a "pilot" and said, "HPD based its request to Enterprise on suggestions made by the CLT applicants, who outlined their anticipated needs for operations support or project financing."

"We believe these grants have the potential to both help emerging CLTs get off the ground, but also for HPD to learn how this innovative ownership model can interact with those existing local and federal affordable housing programs," she added.

#CLT
#Community land trust
#HPD
#original
Do you know the scoop? Comment below or Send us a Tip