NYC is Good for Walkies 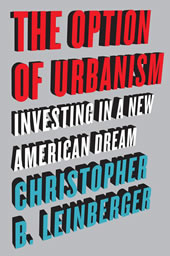 A Brookings Institution study reveals that New York is a great place for walking, with 21 out of 21 walkable urban places. But Washington D.C. is the most walkable on a per capita basis while New York is ranked 10th, because New York is measured as the NYC metro area, including NJ, Pennsylvania and Connecticut.

The study's author, Christopher B. Leinberger, admits there are issues with the methodology, namely that walkable places are weighted the same in different areas, even though Midtown Manhattan is 30 times bigger than the DC area's Reston Center. We'd be curious to see how the study would work if only the cities, not including the metro areas, were measured. You can read more about the study here (PDF).

Leinberg also has a book called, The Option of Urbanism: Investing in a New American Dream, which explains that for many years U.S. government has focused on suburban development, driven by the auto and oil industries, which has "fostered the decline of community, contributed to urban decay, increased greenhouse gas emissions, and contributed to the rise in obesity and asthma." He believes that there's a movement towards "walkable urbanism," (as in people flocking towards areas with mass transit) saying, "How the American dream plays out on the ground is changing. Rather than building only 'Leave it to Beaver' neighborhoods, we are building walkable, Seinfeld-like places." Real life as Seinfeld? Sweet fancy Moses!