Modesta Toribio sat in her office in Jackson Heights, Queens, Saturday afternoon, as her 4-year-old daughter made a poster asking President-elect Donald Trump to let her immigrant friends stay in the United States.

"I don't think we're going to be safe in New York City, but we're not going anywhere," she says. Toribio immigrated to New York from the Dominican Republic 13 years ago. She works as an organizer at the immigrant advocacy group Make The Road New York and last Tuesday she spent the day getting out the vote on Long Island. She says she felt certain that Hillary Clinton was going to win the presidential election. When Trump emerged victorious, Toribio and her colleagues, as well as the immigrant clients they serve, were shocked and horrified.

By the time she came into her office on Wednesday, she says, people looked like "there had been a terrorist attack."

"I wanted to cry, but now we have to begin preparing for the worst," she said. Since Trump's election, the organization's phones have been ringing nonstop.

Trump's election has cast a pall over immigrant communities across the United States, as they face the reality of a president who has promised to build a wall along the border with Mexico, deport millions of undocumented immigrants, and ban Muslims from entering the country. Trump will inherit an extensive deportation apparatus that has been beefed up by the Obama Administration, with support from a Republican-controlled congress. President Obama has presided over the deportation of more immigrants than any of his predecessors in office.

In the past eight years, the federal Immigration and Customs Enforcement agency has cracked down harshly on New York City's immigrant communities. New York's "sanctuary city" policies prohibit coordination and information-sharing between city agencies and the federal immigration authorities, but the city does not have the power to prevent ICE from operating within its bounds. ICE agents have conducted hundreds of raids in the city, entering homes and picking up people from courthouses.

Immigrant advocates and organizers fear the raids will only get worse under a Trump presidency.

"We don't have four years to get through, and we certainly don't have eight years," said Abraham Paulos, executive director of Families for Freedom, an organization that works with immigrants who come into contact with the criminal justice system. 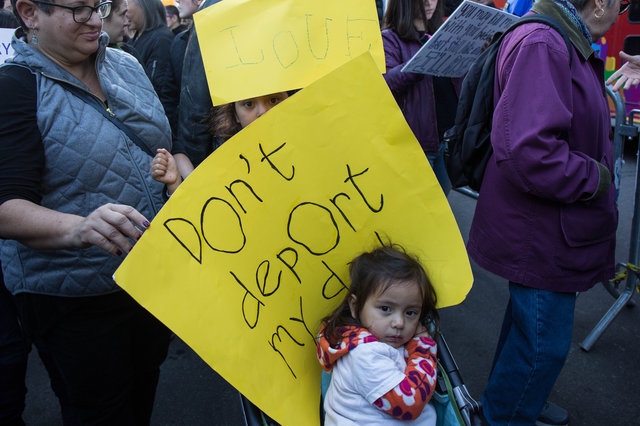 In an interview that aired Sunday night, Trump said he would focus his deportation efforts on individuals with criminal convictions, much in keeping with President Obama's current immigration policy. New York City politicians have pledged to protect immigrant communities, but for many, that pledge feels toothless.

"We need to just go to the basics and organize, because we have no reason to believe any word our politicians say," Paulos said. "You've already done nothing to stop home raids that are already happening."

The legislation that created that program includes provisions for the destruction of data that may compromise the security of participants. Mayor Bill de Blasio has said his administration will invoke these provisions if necessary.

The mayor has also more broadly pledged to defend immigrants, but has not yet offered specifics on his plans to do so.

One of Trump's main campaign promises was the immediate repeal of Deferred Action for Childhood Arrivals, a program that has allowed young immigrants who register with immigration authorities to avoid deportation. DACA was created through executive order, which means Trump could cancel it with the stroke of a pen. If he does so, over 36,000 immigrants in New York State are at risk for deportation. ICE already has their names and addresses on file.

Even if Trump chooses not to immediately end DACA, his plans to target immigrants with criminal records threaten thousands of New Yorkers. People could be deported for crimes "involving moral turpitude," which could mean anything from turnstile jumping, selling counterfeit goods, or petty theft. Any type of criminal record could put an individual into deportation proceedings, even if they stand a good chance at winning their case eventually.

"Think about it—over a third of New York City is foreign born. One in nine have a criminal record. If they don't come for us today, they'll come for us tomorrow," Paulos said. 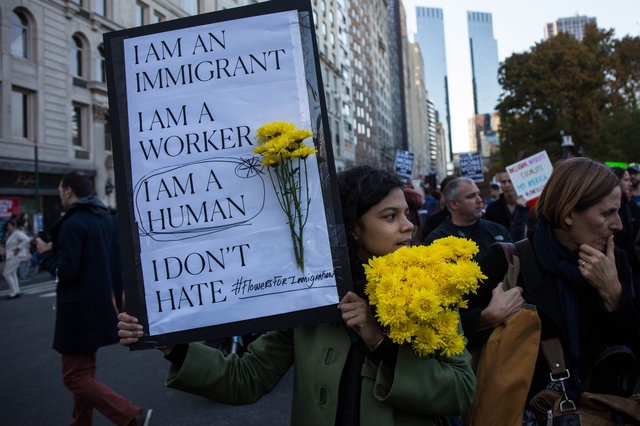 On Sunday, the day after I met with Toribio in Jackson Heights, Make The Road, as well as several other immigrant rights organizations, led a march through midtown Manhattan to protest Trump. At the march, thousands of people voiced their anger at Trump's immigration policy plans, as well as his stance on women's and LGBTQ rights.

Daniel Altschuler, the director of civic engagement and research at Make The Road, has been a critic of the Obama Administration's immigration policies, but he said he sees the threat posed by a President Trump as far graver.

"We've called Obama the 'deporter-in-chief,' and his administration has been harrowing for many people in the immigrant community," Altschuler told Gothamist. "That being said, the rhetoric and the threats of Donald Trump have a qualitative difference in the scale of the threat. We see someone who has vowed to attack communities. Someone who has vowed to not only continue to expand the immigration enforcement apparatus, but to attack cities and jurisdictions that have taken steps to integrate and protect immigrants."

Undocumented immigrants do not have a right to counsel in immigration proceedings, though in New York City, almost 90 percent of immigrants detained by federal authorities receive a lawyer. (Nationally, less than 40 percent go through deportation proceedings with legal representation.)

The city's legal service organizations are girding for heavy caseloads of immigrant clients, as the prospect of mass deportations looms.

"Right now, we're thinking through the ways that people are going to be targeted and found and how we can provide training to folks, and how we could do deportation defense and create support teams that are standing by ready to help," said Alisa Wellek, the executive director of the Immigrant Defense Project.

"We're planning to use the last few years as a blueprint for the tactics that we can expect to see, but ramped up. Under Trump, we might go back to the types of large-scale raids that we saw during the Bush years, and not so much from Obama, who focused on home raids and smaller actions."

Wellek says state lawmakers could be a key ally on efforts to shield the city's immigrants from a federal crackdown—if Albany is interested in helping.

"There's a lot of room for criminal justice reform on the state level that could protect immigrants from deportation," Wellek told Gothamist. This could include Governor Andrew Cuomo pardoning immigrants with low-level criminal convictions on their records, or pressuring prosecutors not to over-charge individuals arrested for minor violations. On the city level, the de Blasio Administration could roll back "broken windows" policing practices that criminalize acts like fare-beating or drinking in public.

"There's a lot that could be done given the nightmarish scenario we're now in," Wellek said.

But time is short. Trump will take office in just two months.

"We don't know what's going to happen," Toribio said. "But for now, we have to take Trump at his word."

The President-elect said Sunday he would immediately deport two to three million immigrants.

#deportation
#donald trump
#immigrants
#immigration
#original
Do you know the scoop? Comment below or Send us a Tip