NYC Home Foreclosures on the Rise 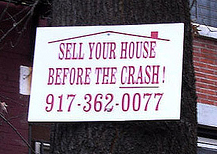 A report tracking the rates of property foreclosures in New York state showed the the city was not impervious to the wave of distressed homeowners that is sweeping the rest of the country. Staten Island was the only borough that displayed a decrease in the rate of its foreclosures (6%). Leading the boroughs with foreclosure increases was Queens (126%), followed by the Bronx (56%), Brooklyn (51%), and Manhattan (12%). We published this map of city foreclosures back in March.

The report was released just days after an article appeared in The New York Times, describing the New York real estate market's seeming resistance to any type of downturn, where property values have continued to soar as other regions falter. That Times article appeared just two days after the paper ran a piece on how the ailing mortgage market was putting a strain on homebuying in Manhattan, as banks were requiring lenders to provide more of the purchase price for a property up front or pay a higher interest rate on their mortgages.

The probable reason for the recent increase in foreclosures is the fact that the soaring NYC real estate market made making highly leveraged loans to borrowers with even less-than-perfect credit appear to make sense. These subprime loans often involved repayment plans that only covered the interest portion of the debt that didn't allow borrowers to accumulate equity, or quickly exposed the borrower to increased required payments with a rise in interest rates. The easy ability to borrow large amounts of money helped fuel the boom in property values in NYC, but it also left both borrowers and lenders highly vulnerable to adverse economic changes in circumstance, and the result has been the recent increase in loan defaults. Nationally, the foreclosure rate is up 93% year over year.

U.S. Senator for NY Chuck Schumer is warning that New York is not immune to the subprime lending crisis and has introduced legislation that would allow homeowners in trouble to take out more loans or restructure their loans to prevent foreclosure. The legislation involves setting up a national regulatory system for mortgage brokers, eliminating "liar" loans that have little chance of ever beeing repaid by a borrower but generate broker fees, and establishing a task force to aid homeowners who are in distress.

(Image from Sell Your House BEFORE THE CRASH!, by Jimmy Legs at flickr)