As expected, New York City has recorded 414 murders in 2012 so far, which means it's the lowest number of murders since the NYPD started keeping track in 1963. Mayor Bloomberg said, "The fact that the safest big city in America is safer than ever is a testament to the hard work and determination of the men and women who put their lives on the line for us every day—and it also reflects our commitment to doing everything possible to stop gun violence."

The previous lowest-murders-ever year was 2009, when there were 471—see chart below for history. Shootings also fell to 1,352 in 2012 (the previous lowest-ever was in 2009, with 1,420). Police Commissioner Kelly noted, "We’re taking 8,000 weapons annually out of the hands of people we stop, 800 of them illegal handguns. We’re preventing crimes before someone is killed and before someone else has to go to prison for murder or other serious crimes. We’re also forging new alliances with advocates for public safety in every corner of the city."

The city credits the NYPD's Operation Impact program, which focuses on "violence-prone areas" and has been in effect since 2003, with the lower statistics. However, it's important to note that stop-and-frisks have declined as well.

The city's press release was full of bragging:

With the decrease in murder, New York’s murder rate has fallen to 3.8 homicides per 100,000 residents. New York City has a far lower murder rate than other major American cities. For example:

While NYC is definitely much safer now than in the past (2,245 murders in 1990!) and does better than other major U.S. cities, the NYC murder rate lags behind other countries like France and Japan.

More stats: "Guns remained the leading cause of murder in New York City again this year. Of the 414 homicides so far this year, 237 were by firearms. This is 61 fewer gun related murders than last year, a decrease of 20 percent. In 2001, there were 371 gun related murders, 36 percent more than this year." 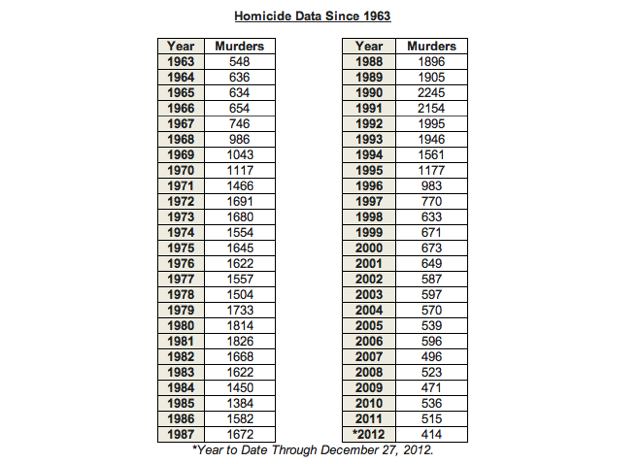