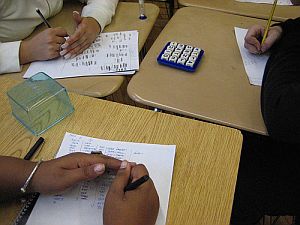 A study conducted by the non-profit group America's Promise Alliance has found that New York City has one of the nation's worst high school graduation rates, ranking 43rd among 50 other major U.S. cities and their surrounding areas. Only 45% of high school students in New York City graduate in four years, while in the surrounding suburbs, the four year graduation rate is 83%

But the study was conducted using data from 2004, and the Department of Education claims the city's graduation rate has risen six points since then. Also, each state has different educational standards, so comparisons can be a bit misleading. Still, who will be surprised that poor Detroit, which can't catch a break, would get the worst ranking, with just 25% of students graduating? At least New York students bested, in order, Dallas, Minneapolis, Columbus, Baltimore, Cleveland and Indianapolis. L.A. students managed to flirt their way past New York by 0.1% and snag the #42 slot. Number One? Mesa, AZ.

The report, which concludes that, on average, only half of the students in America’s major cities graduate, can be perused as a PDF file. And the America's Promise Alliance website is introduced by a really weird Colin Powell video, presumably because he did such a stellar job educating the U.N. about Iraq’s WMDs.

#America's Promise Alliance
#drop out
#graduation
#new york city
#ranking
#rates
#study
#worst
Do you know the scoop? Comment below or Send us a Tip