NYC Had Its Safest June Since 1993

New York City had its safest June since 1993, according to NYPD officials who are eager to point out the overall decrease in crime even as shootings and murders remain slightly higher than they were a year ago.

"We've got a good handle on the crime situation in the City of New York," Commissioner Bill Bratton told reporters yesterday, citing an 8.5% decrease in crime last month, and the 47,000 total crimes logged during the first six months of the year. New York City has never fallen below 100,000 crimes a year since police started counting.

Police have also made 35,000 fewer arrests in the first six months—mostly for misdemeanor offenses like marijuana possession—and have written 47,000 fewer summonses (in 2013, the NYPD wrote more than 4.5 million).

"Gang-related homicides are up, and they are up by 13 this year," Shea told reporters.

Shea identified precincts in Harlem, the Rockaways, and Staten Island as where the city has seen most of the increase in shootings and murders. 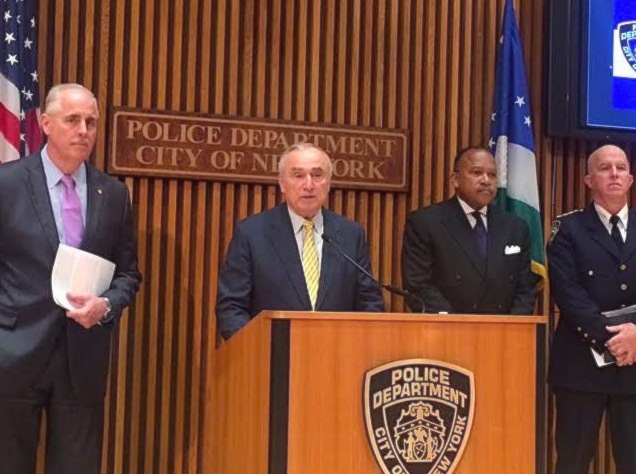 The department's "Summer All-Out Initiative" will send 300 officers to those areas from "four to 12 in the afternoon and midnight tours on the weekends," Chief of Department James O'Neill said. "Since Summer All Out began on June 8th, in those commands, we've seen shootings decrease by more than 19% and murders dropped by 50%"

Commissioner Bratton brushed aside a question about whether or not the NYPD would start treating minor crimes such as drinking in public and public urination as civil offenses, and reiterated his opposition to the nine police oversight bills being considered by the City Council.

Bratton also denied reports that the 1,297 new police officers he just received from the de Blasio administration had anything to do with the increase in murders and shootings, though his assurances were as unconvincing as the reams of boilerplate the department released last week to account for the mayor's abrupt change of heart.

"It really had nothing to do with that crime increase, which I suggested to you was an uptick," Bratton said. "Those 1,297 are a plan that…was presented to the mayor and then subsequently the City Council—to re-staff precincts to implement a lot of the community relation building initiatives that we announced."

#1pp
#Bill Bratton
#crime
#nypd
#summer all out
Do you know the scoop? Comment below or Send us a Tip