TIJUANA—Kaji Douša, the Senior Pastor at The Park Avenue Christian Church, stood on a pedestrian bridge over the Tijuana River on Tuesday, overlooking the concrete riverbed where American security forces had lobbed tear gas canisters at Central American migrants just two days before. Douša had come to Tijuana from New York City as part of the “Sanctuary Caravan,” a project aiming to recruit faith leaders to travel to the border to accompany migrants as they face their uphill battle to safely enter the United States and begin the asylum process.

Looking at the new concertina wire placed on top of the border fence, as well as the phalanx of border patrol vehicles waiting just beyond it, Douša didn’t waste any time pointing out the biblical implications of a border closed to migrants.

“We’re heading towards Christmas, where the entire story was about the holy family as Mary was about to give birth to Jesus, and them being turned away. And then as soon as Jesus was born, the holy family and thousands of other refugees, fled to the Egyptian border,” Dousa told me. “Everybody wants to talk about putting ‘Christ’ back in Christmas. For us? That means showing up for Christ as he’s trying to cross the border… That’s what this trip is for.”

Six other faith leaders had joined Douša in the trip to the border, representing Baptist, Pentecostal, Presbyterian, and Lutheran denominations. Their plan was to plug in with local organizations helping the thousands of migrants crammed into makeshift shelters, a humanitarian crisis that continues to deteriorate as the president relies on anti-immigrant rhetoric to energize his political base, even as unauthorized border crossings have dropped to record lows. 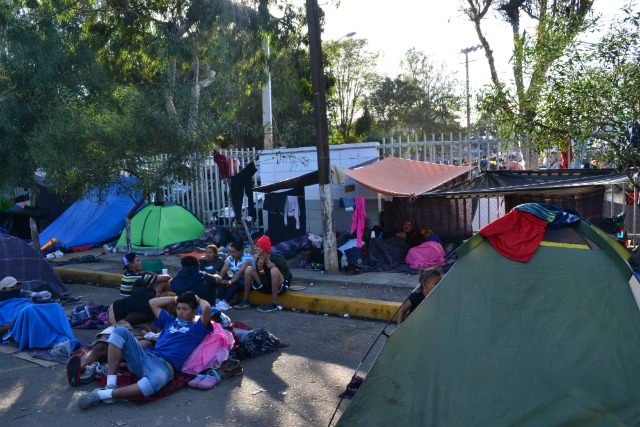 This type of work, using faith rooted in social justice and racial equity to attempt to overcome a government that demonizes undocumented immigrants, isn’t foreign to the leaders of the Sanctuary Caravan. The project is an offshoot of the New Sanctuary Coalition of New York, which rallies religious congregations to help protect refugees and immigrants. One of the leaders of the New Sanctuary Coalition, Ravi Ragbir, traveled down to San Diego this week to help kick off its new project. But Ragbir will be staying on the north side of the border, as his own immigration case continues to play out. For weeks, volunteers have been training in New York in anticipation of traveling down to the border to support the migrants.

In Tijuana, the group of seven faith leaders stopped in at Enclave Caracol, an anarchist cafe that has become a meeting place and legal support center for wave after wave of Central American migrants. The group met with Nicole Ramos, an immigration attorney with Al Otro Lado, whose office on the top floor of the cafe has become a nerve center for migrants, lawyers, and activists trying to figure out how to navigate the increasingly dire situation.

The kitchen at Enclave Caracol, manned by volunteers, has been operating nearly non-stop for the past several weeks, trying to meet a need the Tijuana government has essentially ignored. Outside, migrants lined up for food. One teenager said the line wasn’t too bad, as it took her just a half hour to get a plate of spaghetti.

“I think before Sunday people were hopeful that the United States would have a heart and open the doors,” said Amelia Frank-Vitale, an anthropologist who has been helping migrants in Tijuana since last week. “Since Sunday, that hope has been quashed.” 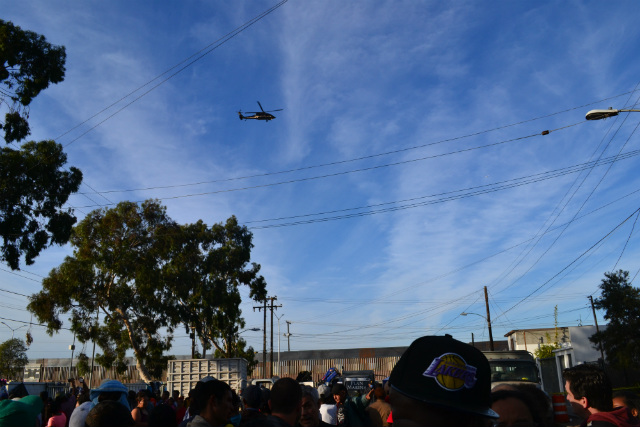 At Benito Juarez, a converted sports complex in the shadow of the border wall where the majority of migrants in Tijuana are taking shelter, lines form almost immediately whenever any donated food is about to be distributed. Overhead, U.S. helicopters race back and forth along the border. Shouts of “Fila! Fila! Fila!” ring out whenever anyone dares to disregard the mostly orderly queues.

Minister Heaven Berhane, one of the faith leaders who had come down with the Sanctuary Caravan, wondered aloud why the United Nations was not playing a more active role in what had very clearly become a refugee camp along the U.S. border.

“Last year, I was on the island of Lesbos in Greece, visiting a refugee camp, and what I’m seeing here in Tijuana is… I’m having flashbacks,” said Berhane, who came to America as a one-year-old refugee from Eritrea. “Here you see people in makeshift refugee camps without the proper organizations or legal entities to supervise and oversee what’s happening. That says a lot.”

Migrants at Benito Juarez held a press conference on Tuesday afternoon to issue a series of demands in response to a number of deportations of migrants by the Mexican government. One of the demands was for “Human Rights accompaniment” to “prevent the violation of migrant human rights.”

The Sanctuary Caravan plans to provide forty days and forty nights of support to migrants in the form of accompaniment to ports of entry as well as offering free pro se legal clinics on the asylum process. This morning, Sanctuary Caravan members escorted unaccompanied minors from Honduras to the San Ysidro port of entry, where the minors will begin the asylum process.

The Sanctuary Caravan hopes to track their progress and provide support for the migrants at every step of their journey, something that many non-profit groups have trouble doing through a convoluted system that spans different states, government agencies, and languages.

In the coming days, the organizers of the Sanctuary Caravan will be announcing further plans for when and how they want faith leaders and volunteers to come to Tijuana. So far, they’ve received hundreds of serious inquiries.

“As we heard the military and vigilante groups were coming as well,” Douša said, “we felt it was important to send just as many faith leaders down.”

Other tasks the Sanctuary Caravan has set out to do come much easier to those with religious training. 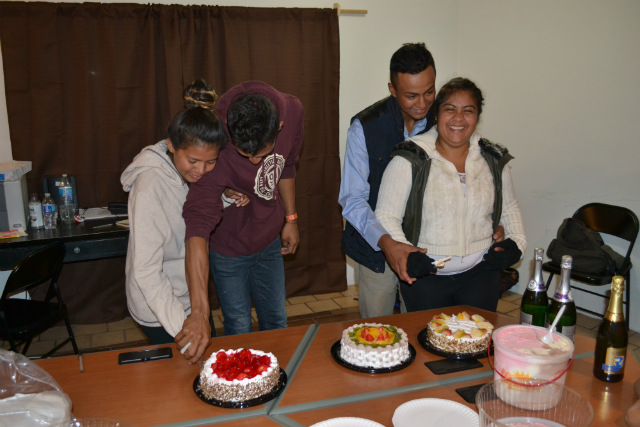 On Tuesday evening, on the roof of Enclave Caracol, the Sanctuary Caravan presided over an impromptu wedding ceremony for two young couples from Honduras. Their hope was that by providing documentation of a marriage, even a recent one, it would strengthen the couple’s case to be kept together as a family unit through their asylum proceedings.

“So how are we going to do this?” Berhane asked the other faith leaders. “We’ll do a quick ceremony and then pray? Does that sound right?”

Before long, wedding cake and champagne appeared on the bare table. Someone queued “Here Comes The Bride” on their iPhone, as the two brides entered simultaneously.

Nusly Medina, 23, and Addison Alvarado, 22, had been traveling north from Honduras for a month and a half. They had been a couple for a year, and Medina is seven months pregnant.

“I want the best life possible for my child. I don’t want them to miss anything. Because during my childhood, I didn’t have a father who cared for me. I want to give the best to my baby, so they don’t want for anything,” Alvarado told me.

“And a good education,” Medina chimed in.

After the ceremony, another line was formed — this time for cake.

Walking back to the border, Douša passed by the floodlights that Border Patrol has recently installed facing into Mexico.

“I’ve presided over hundreds of weddings in my time as a pastor,” she said. “But that one, was by far, the most special.”

#immigration
#mexico
#sancutary caravan
#undocumented immigrants
#longform
#original
Do you know the scoop? Comment below or Send us a Tip