NYC Doctor Who Had Ebola Discharged From Hospital, Immediately Hugs Everyone In a very public display of confidence in his Ebola-free status, Dr. Craig Spencer hugged his way out of Bellevue today, warmly embracing everyone from Mayor de Blasio to the doctors and nurses who helped him recover from the disease. "As you can see, Dr. Spencer is a very huggable guy," a beaming de Blasio remarked. "It's a good feeling to hug a hero, and we have a hero in our midst."

Addressing the public concern sparked by news of NYC's first confirmed Ebola victim, de Blasio took pains to praise NYC Health Commissioner Dr. Mary Travis Bassett. "The facts were what mattered," de Blasio said. "Throughout these weeks there has been a voice of calm, and reason, and science, and her voice has been heard all over the state and all over the nation... Dr. Bassett was the truth-teller."

Dr. Bassett took the opportunity to divert attention from Dr. Spencer's recovery to West Africa, where 4,960 have died as of November 7th. "I want to salute [Dr. Spencer]," Dr. Bassett said. "His work in West Africa was not only for the people of Guinea, it was for all of us. We will not vanquish this epidemic until it is vanquished in Africa. Dr. Spencer and Doctors Without Borders have been taking the burden for all of us."

Dr. Bassett then went in for a hug with Dr. Spencer, who used his time at the mic to thank everyone at Bellevue for saving his life and call attention to Doctors Without Borders. "Volunteers need to be supported to stop this outbreak at its source," said Dr. Spencer. "Today I am healthy and no longer infectious. My early detection, reporting, and now recovery speaks to the effectiveness of the protocols for health care workers returning from Africa."

Dr. Spencer added, "While my case has garnered international attention, it is important to remember that my infection represents but a fraction of the more than 13,000 reported cases to date in West Africa, the center of the outbreak where families are being torn apart and communities destroyed... Please join me in turning our attention back to West Africa, and ensuring that medical volunteers and other aid workers do not face stigmas and threats when they return home... I will not be commenting publicly beyond this statement, and I urge you to please focus your attention where it is needed: at the source of the Ebola outbreak in West Africa." 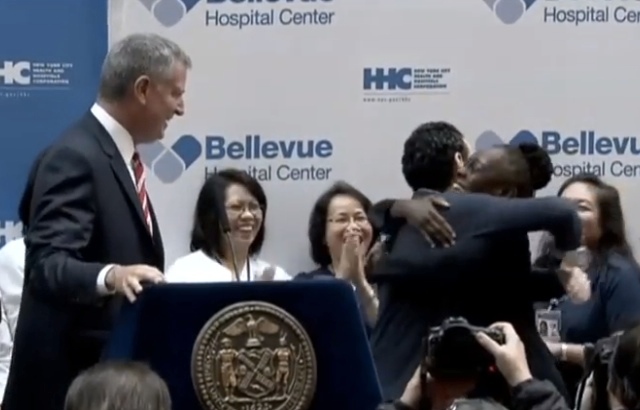 Dr. Spencer's discharge, 41 days after the first Ebola diagnosis in the United States, marks the end of known Ebola cases in America. The first diagnosis was Thomas Duncan, a Liberian who arrived in Texas in September and died eight days after he was diagnosed. Two nurses who treated Duncan were infected during his hospitalization, but they have since recovered.

#bellevue
#craig spencer
#de Blasio
#ebola
#original
Do you know the scoop? Comment below or Send us a Tip