All 2,300 day care facilities with permits from the City will be required to post performance cards near their front entrances by next summer, in accordance with a new city rule inspired by restaurant letter grades.

"The Child Care Performance Summary Card is our latest effort to ensure that parents get information that is not only readily accessible, but also easy to understand," said Mayor de Blasio in a statement.

Between 2013 and 2015, NYC group daycares accumulated an average of eight violations per provider.

These violations range in scope—from unlicensed teachers, to teachers without CPR training or background checks. Some group daycares consistently fail to provide adequate hand-washing stations, while others had cluttered hallways.

The Mayor's announcement follows findings that hundreds of group day care facilities in NYC have consistently failed their annual health and safety inspections without consequence. A group of state senators issued the report [PDF] on day care violations in November, prompted by the tragic death of three-month-old Karl Towndrow on his first day at a SoHo day care last July.

Of the nearly 11,300 day care facilities in NYC, only 2,272 of them are licensed by the city. The rest are state-licensed, and are required by law to conspicuously post any violations. Previously, there was no such requirement at the city level.

The new cards, which the city says will be updated following each inspection (at least once a year), will include quick stats like the number of children allowed in each facility, whether the day care program in question has ever been shut down, and the number of Health Code violations issued there compared to a city-wide average. 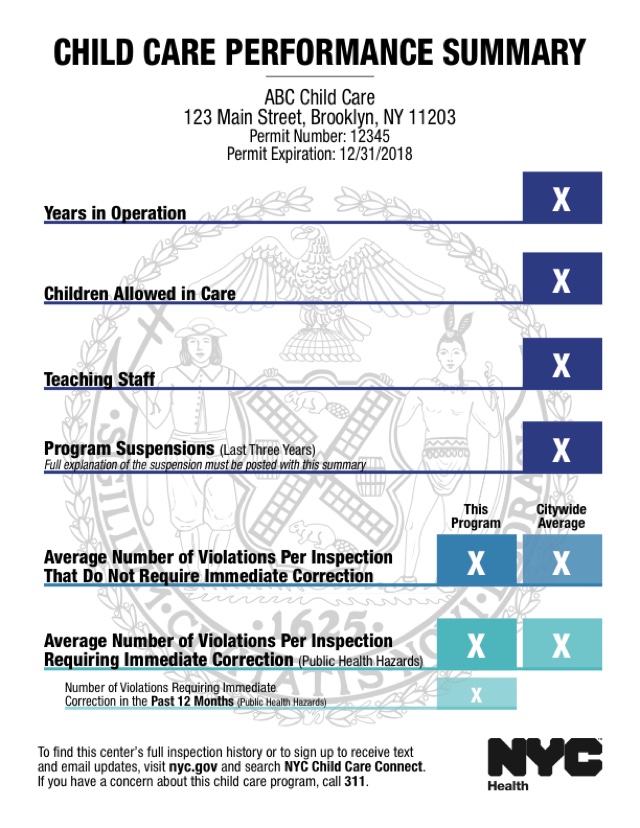 "There is no incentive for day care providers to change," Karl's mother Amber Scorah, who works in publishing and occasionally contributes to Gothamist, told us recently. "The process for finding out about violations is not very open, and most parents have difficulty tracking this information down."

"In our case, the teacher had a write-up in the New York Times, and we knew people who had sent kids there," Scorah added. "We toured it, and we were told something that wasn't true."

It turned out that the facility was over-capacity, and that none of the teachers were trained in administering CPR.

Today Scorah said she was very pleased with the city's quick action. "Parents will now immediately have access to truthful information about a daycare they are considering," she said. "And since it is a requirement that all day cares post it, it will be obvious to any parent right away if a facility is unlicensed, even if it has been in business for a long time."

The Health Department also recently overhauled its Childcare Connect website, which allows parents to search inspection records at day care facilities, and sign up for text alerts about scheduled health and safety inspections.