Cyclist deaths increased 25 percent over the twelve month period ending in June, according to the Mayor's Management Report for 2016 [PDF]—an annual report that aims to quantify the administration's progress on broad areas of concern like public safety, education, and healthcare. (NYC’s fiscal year is a 12-month period from July to June. It differs from the federal fiscal year, which ends on September 30th each year.)

"Two years after the launch of Vision Zero, we are making significant progress," the report states. "By the end of 2015, traffic fatalities on City streets were at their lowest levels since 1910, when the City first began keeping records."

Safe street advocates noted a spike in cyclist deaths in July after 35-year-old Matthew von Ohlen was struck and killed by a hit-and-run driver while riding his bicycle along a Williamsburg bike lane. Von Ohlen was the 12th cyclist to be killed on NYC streets in 2016, according to the NYPD. By comparison, five cyclists had been killed by that point last year—a year-to-year increase of 140%. There have not been any arrests in the von Ohlen case as of this month.

Advocates say the NYPD and District Attorneys should dedicate more resources to punishing rogue drivers. New York's Right of Way Law enables district attorneys to prosecute failing to yield and striking pedestrians and cyclists as a misdemeanor. Yet last year, according to Transportation Alternatives, drivers who failed to yield caused 5,966 crashes resulting in death or injury and fewer than 40 of them were prosecuted for it.

The de Blasio administration has countered that the NYPD focuses its resources on hit-and-runs that result in serious injury or death, of which they say there were 52 last year. In those cases, 30 arrests had been made as of July.

The MMR report for September states that the city is working on redesigning dangerous intersections and installing bike lanes in order to bring fatality statistics down. The city also conducted a study on crashes involving cars making left turns, and found that left turns cause more than twice as many pedestrian and cyclist fatalities as right turns. Seven left-turn intersections were updated in June, and 93 more are scheduled for redesign this fall. The first updated section of Queens Boulevard also opened last year, one of four major outer borough roadways targeted for their disproportionately high fatality numbers.

"Queens Boulevard is this beacon, as it should be," said Caroline Samponaro, deputy director of Transportation Alternatives. "It's amazing. But that kind of investment in a major arterial street—all streets have to look that way."

Samponaro said that the city should make larger investments in its annual capital and operating budgets to fast-track protected bike lanes on all of its priority corridors. When 78-year-old Queens man Michael Shenkmen was killed by a driver while cycling last month, she pointed, out, cyclist deaths for 2016 surpassed the total for 2015.

"It's just not enough resources," she said. "What they are doing right now is they are measuring their creation of protected bike lanes by saying they're doing better than last year. But it's not enough to solve the problem." 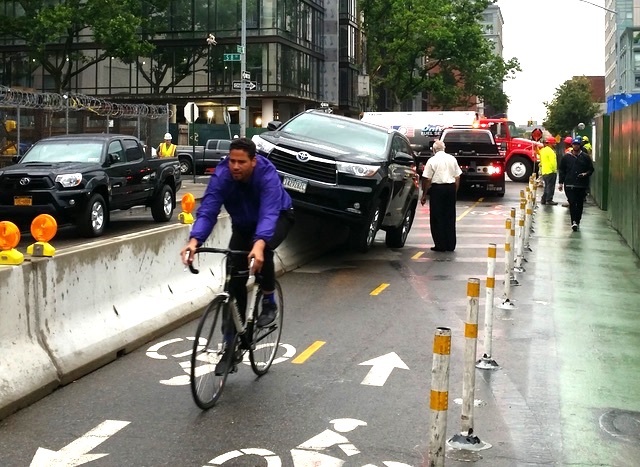 The MMR also notes an increase in traffic crashes involving city vehicles—i.e. fire trucks, ambulances and sanitation trucks, excluding NYPD vehicles. According to the city, such crashes increased almost 11 percent in the last FY, from 5,726 in 2015 to 6,344 in 2016.

Parsed more closely, there were 1,056 ambulance crashes in FY 2016—almost three per day on average—up from 806 last year. There were 2,625 crashes involving sanitation trucks in FY 2016—about seven per day—comparable to last year's 2,616.

The city said that 7,900 City employees got defensive driver training in FY 2016, bringing the total to 30,000 since Vision Zero launched. The Mayor also prohibited non-emergency City drivers from using hand-free phones, in addition to handheld phones, in May.

We believe every cyclist death is both preventable and tragic. To that end, we continue each day to build bike infrastructure and expand the bike lane network. We are adding a record 18 miles of protected bike lanes this year, more than last year’s record number of 12.4, and we are building 61 miles of protected and exclusive bike lanes, among the most ever.