East Side Councilman Ben Kallos is planning to introduce a bill to cut down on light pollution by mandating that the city use light-directing fixtures when replacing streetlights.

Kallos said that the measure would help limit light shining into New Yorker's apartment windows, and also conserve energy, darken the night sky, and reduce the harmful effects of stray light on wildlife.

"New York City may be the city that 'never sleeps,' but that shouldn’t be because of a streetlight outside your bedroom window," Kallos said in a statement. "Fully shielded light fixtures will brighten up the day with fewer sleep-deprived New Yorkers walking around in a bad mood."

Fully shielded light fixtures cover the sides of streetlights' bulbs to ensure that they shine only where they're supposed to: on the ground. Currently, it's common for city streetlights to be only partially shielded, with the bulbs jutting out of their cobra-head fixtures. In parks, historic districts, and on the sides of flashy buildings, it's common to see barely or not at all shielded lights shining out into the surrounding area and up into the night sky.

Kallos plans to introduce the legislation on Tuesday in honor of Earth Day, which is this Saturday. He said he got the idea for the bill at one of his monthly policy nights, when an anti-light-pollution activist with the International Dark Sky Association brought up streetlight shielding.

It didn't hurt that he's an amateur astronomy buff.

"I enjoy stargazing. I enjoy astrophysics. Stephen Hawking is one of my favorite authors," he said. "It’s hard for people in the city to get curious about the cosmos when you look up and all you can see is light." 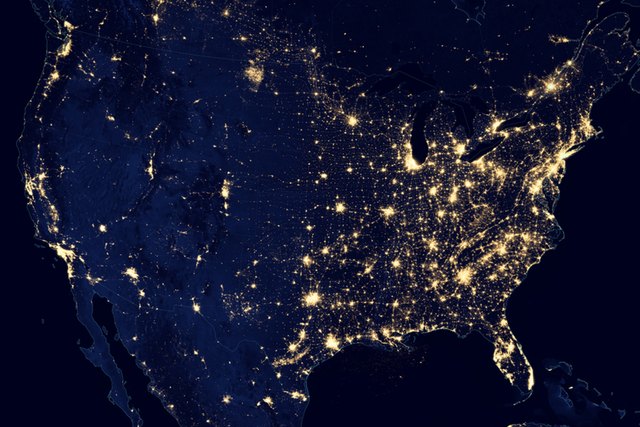 The United States looks cool from space, but there isn't much reason we should be sending all that light skyward. (NASA Earth Observatory images by Robert Simmon and Jesse Allen, using Suomi NPP VIIRS data provided courtesy of Chris Elvidge at the NOAA National Geophysical Data Center)

Kallos doesn't own a telescope, but he has some binoculars that he says let him see a bit of the astral action, and he is a fan of events held by the Amateur Astronomers Association, which brings high-powered telescopes to spots around the city for viewing by all comers. (Find them at Lincoln Center tonight starting a little after dusk.)

The issue of streetlights shining into people's apartments has taken on added urgency over the past three and a half years as the city has set out to replace its 250,000 yellow sodium streetlights with LED bulbs. The new bulbs are bluer, and more like daylight than the old ones, an attribute that can throw off people's circadian rhythms and potentially pose health risks. In places where the new lights have gone in, particularly in Brooklyn and Queens, where the city has installed the bluest lights, their arrival has prompted people to buy blackout curtains to beat back the invading rays from their bedrooms. 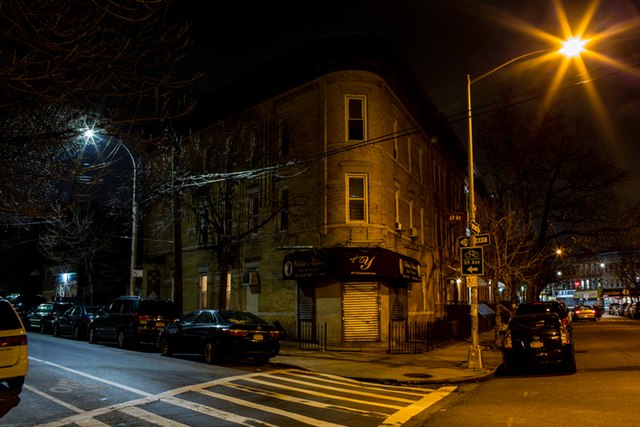 In February, Ridgewood, Queens was still a patchwork of yellow sodium lights and blue LED lights as workers gradually replaced the former with the latter. (Scott Heins/Gothamist)

The city's lighting problems are interconnected, according to Susan Harder, the New York state representative for the International Dark Sky Association. She explained:

Ideally good street lighting involves four components. It has to be fully shielded so all the light goes down, instead of up. It has to be controlled—in other words, the light needs to fall where it’s needed, not shine into people’s windows. It needs to have the correct color, so it’s not very blue. The light levels [where the light hits the ground] shouldn’t exceed the professional recommendations.

Harder called Kallos's bill "impressive and necessary," and noted that her group had first worked with former councilman Alan Gerson to try to introduce such a bill 12 years ago.

A separate bill, introduced by Councilman Donovan Richards in 2015, sought to require the city to only use bulbs with a color spectrum rating lower than 3,000 degrees Kelvin (Kelvin ratings range from red to yellow to blue, with lower numbers being redder). The old sodium bulbs have ratings of about 2,200K, whereas Brooklyn and Queens have gotten 4,000K bulbs. Richards's bill has yet to get a hearing, but following outcry from residents and the American Medical Association issuing new guidelines on the risks of blue LED streetlights, the DOT said it would install 3,000K lights going forward.

Kallos said he plans to sign onto the color temperature legislation and hopes to get both bills passed. A spokesman for Richards said the bill is currently "in limbo," and that the earliest it could next get a hearing is in the fall.

A spokeswoman for the Department of Transportation, the agency that would be most impacted by the new light fixture requirement, said that officials there intend to review the legislation when it's formally introduced.