On Monday, the City Council held its first hearing on a bill that would require the city to provide lawyers for indigent tenants facing eviction in Housing Court, more than two years after the legislation was first proposed.

Unlike defendants in criminal cases, individuals who cannot afford an attorney in civil proceedings, such as Housing Court cases, are not entitled to state-provided counsel. In New York, this gap means tens of thousands of tenants who go to Housing Court each year without legal representation.

According to Public Advocate Letitia James, who spoke at a rally before the Courts and Legal Services Committee hearing, 90 percent of landlords in Housing Court cases are represented by counsel, compared to 10 percent of tenants. James said the eviction rate for tenants who represent themselves in Housing Court is 50 percent.

"This is a bill that will give a voice to thousands of New Yorkers facing eviction because of lack of access to counsel," said Councilmember Vanessa Gibson, who along with Councilmember Mark Levine, sponsored the bill. "Housing Court is broken."

The bill, known as Intro 214-a, would require the city to provide counsel to Housing Court defendants whose incomes are under 200 percent of the federal poverty line, which, according to 2016 data, would be $23,760 for a single person and $48,600 for a family of four. According to a study commissioned by the New York City Bar Association in March, this requirement would cover about 128,000 of the more than 150,000 tenants who face eviction in Housing Court each year.

One such tenant is Debbie Stevens, 58, who has lived in the same five-room apartment in Bay Ridge for 33 years. Stevens shares the apartment with her son, who is autistic. Her landlord has filed repeated eviction notices against Stevens because, she said, she refused to allow exterminators into her apartment. "They've been dragging me to court for two and a half years," she said.

Stevens said she suffers from suffers from pulmonary fibrosis and didn't want the insecticide Transport Mikron, a compound commonly used to treat bedbugs that she feared would exacerbate her condition, sprayed in her apartment. Citing the "reasonable accommodation" provisions of the Americans with Disabilities Act, she demanded that her landlord provide an alternative treatment. (She said she asked for the exterminator to use a soybean-based product.)

Most Housing Court cases are resolved in the halls outside the courtroom, where landlord lawyers and tenants sign "stipulations" specifying conditions to settle a case, such as the tenant agreeing to pay back rent by a certain date or face eviction. Without counsel, tenants are at a huge disadvantage in these negotiations, particularly if they are unfamiliar with basic housing law or speak limited English. 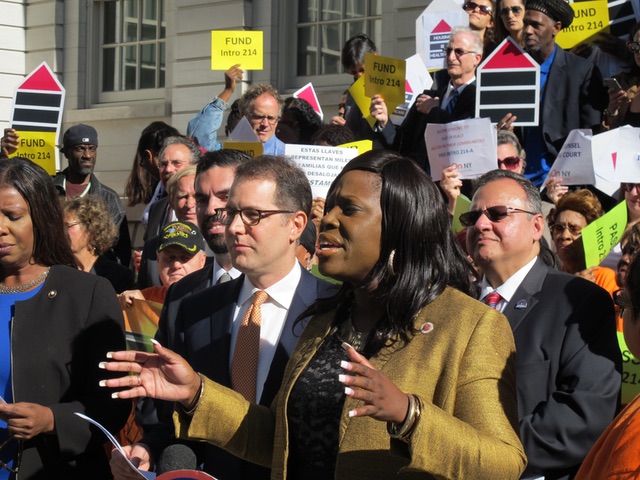 In December 2015, Stevens signed a stipulation agreeing to let her landlord do the extermination. "I didn’t know any better. I didn’t have a lawyer to advise me, and they had high-powered attorneys," she said. "They were threatening to throw us out before Christmas." She claims the judge told her that if she went to trial, she would lose. Ultimately, Stevens was able to win dismissal of the eviction proceedings in federal court.

Last year, around 22,000 people were evicted after losing cases in Housing Court. At the hearing, former New York State Chief Judge Jonathan Lippman, who has been an advocate for legal representation for indigent New Yorkers, said tenants are 77 percent less likely to be evicted if they have an attorney.

Judge Lippman said that if the Council passes the right-to-counsel bill, New York City would revolutionize access to justice. “There’s a crisis in access to justice in this city, this state, and this country,” he testified. “Poor people and people of modest means are falling off a cliff.”

Forty-two of the 51 members of the City Council have signed on as co-sponsors of Intro 214-A. But there are two key names missing from its list of supporters: City Council Speaker Melissa Mark-Viverito and Mayor Bill de Blasio.

Money may be the sticking point. A 2014 study by the city Independent Budget Office found that that the bill would cost the city an extra $100 to $200 million a year. The Bar Association study, on the other hand, estimated that if the bill were passed, it would save the city $320 million.

That study found that the additional $140 million the city would have to spend on counsel for indigent tenants would be outweighed by savings on providing social services, including shelter, to tenants who are evicted and preserving thousands of affordable housing units. (The IBO study did not account for potential savings on preserved affordable housing, while the Bar Association study didn't account for reduced federal aid for shelters.)

Human Resources Administration Commissioner Steven Banks said the de Blasio administration is still reviewing the bill. He told the committee that the de Blasio administration has increased funding for legal services and eviction-prevention tenfold since 2014. According to a report released in August by the city’s new Office of Civil Justice, this spending boost increased the percentage of tenants with representation in Housing Court from one percent in 2013 to 27 percent in 2015. According to the OCJ report, there were 22,000 evictions last year, down from a record high of 29,000 in 2013.

In his testimony, Banks, a longtime advocate for the homeless who also leads the city's Department of Homeless Services, echoed many of the arguments used by supporters of the bill. "Providing legal services is much less expensive than the cost of a homeless shelter," he said. "And of course, no price can be put on averting the human costs of homelessness."

#214-a
#eviction
#mark levine
#real estate
#right to counsel
#tenants rights
#vanessa gibson
Do you know the scoop? Comment below or Send us a Tip