City Councilmembers are seeking to severely restrict sidewalk ticket sellers with new legislation in response to complaints from business leaders in the Financial District and Midtown about aggressive vendors and con artists, and in the process, they could legislate reputable vendors out of existence. The bill, originally part of equally pearl-clutching legislation aimed at restricting costume-wearers to certain areas in Times Square, would do the following:

Why all the fuss? A handful of incidents stand out. There was the 25-year-old charged with misdemeanor assault for allegedly fracturing the skull of a tourist from Arkansas after he refused to buy Statue of Liberty tickets at the Staten Island Ferry Terminal in February. There was the onetime con man last year accused of (but not charged with) charging two tourists $200 each for tickets on the Staten Island Ferry, which of course is free. And there were the various grifters lurking around Times Square on New Year's Eve, hawking tickets to nonexistent ball drop viewing parties at such glamorous Midtown establishments as Sbarro pizza.

Less newsworthy, but equally if not more relevant to the legislation at hand, are the hundreds of ticket sellers who are employed by sightseeing companies and get paid on commission. It's a job that requires insistent persuasion but does not necessarily reward outright skullduggery. And as some of them told Gothamist, that job would be extremely difficult to do under the proposed scheme.

"One of the benefits of this job is that you're able to go anywhere," said Fateemah Adamu-Halilu, who sells tickets for the double-decker green buses run by Go New York, at a rally outside a Council hearing on the bill. "And we are tax-paying, law-abiding citizens of New York City. So this is a restriction, you are restricting our movement. It's not like we're being aggressive."

At a meeting of the Council's Committee on Consumer Affairs, ticket sellers and some of their union representatives testified in droves about how the ticket-selling job provides a second chance for many people convicted of crimes, and an entry-level job for new immigrants supporting families. If there is going to be licensing, most of them agreed, the geographical restrictions on seller movement have got to go. Such limits, they explained, would be unlikely to discourage people who are, say, selling $200 tickets to ride the Staten Island Ferry, or $5 tickets to "see Tina Fey" at a comedy club.

"What does location have to do with stopping this kind of behavior?" Go New York vendor Frederick Nyamekeh asked the Council committee. "A criminal is still a criminal."

For those trying to make an honest living, on the other hand, the regulations could have disastrous consequences.

"Some ticket agents are ex-convicts who are trying to integrate back into society," Nyamekeh said. "If this legislation passes, these people will lose their jobs. What is the saying? 'The devil finds work for idle hands'? They will go back to a life of crime." 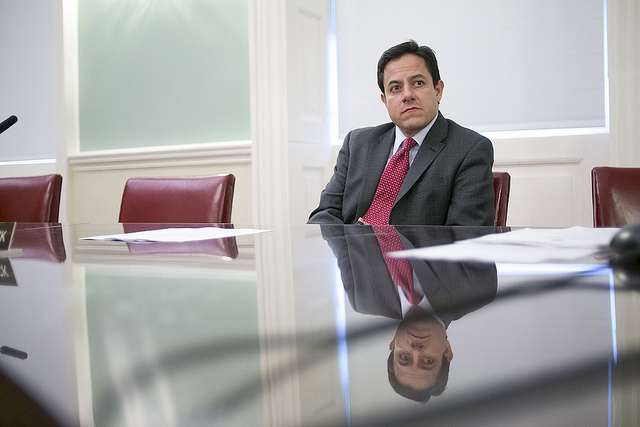 The geographic restrictions, considered together, could push sellers dozens of feet from the buses or Broadway theaters they are selling tickets for, for instance in places where a subway entrance is near a street corner, across the street from a park, and a stone's throw from a taxi stand. On other streets, with sidewalks narrower than 12 feet, the hustle would be banished altogether. In the course of hearing feedback, bill sponsor Dan Garodnick backed off the bans on selling in pedestrian plazas and at bus stops, but the remaining restrictions would still severely limit the movement of practitioners who now frequently duck out of the weather, or walk as they talk to customers or show them to their destinations.

"You shouldn't be having to play a game of Twister to sell tickets," said James Muessig, treasurer of the Transport Workers Union Local 225, which represents Gray Line workers. "You shouldn't be worrying about where you place your feet being a crime."

Local business group leaders from Midtown and the Financial District supported the bill, with several saying they only wish it could go further, with larger buffer zones, numerical limits to the number of vendors per block, and uniform vests and picture IDs required for all vendors. In their testimony, several shared recent counts of vendors: 15 at the entrance to the World Trade Center PATH station, a dozen in front of One New York Plaza, where Morgan Stanley and Revlon workers experience them as "an affront on their personal space, borderline harassment."

Dan Biederman, president of the 34th Street Partnership, won no fans among ticket sellers or tour company owners when he said a bill without spacial restrictions would be pointless, and compared the vendors to "aggressive panhandlers."

"Say you come out of the subway and there is one aggressive panhandler or 20 polite ones, if you were an Italian tourist who doesn’t know what’s going on, which is worse?" he said. "I’d say it’s about even."

Gideon Oliver, a lawyer representing Go New York, said that the legislation is "language taken from squeegee-man-era legislation copied verbatim," and that its prescriptions could violate the First Amendment.

"The NYPD has the tools it needs...to achieve all the enforcement goals discussed," Oliver said, noting that there are already laws on the books against aggressive solicitation, harassment, fraud, assault, solicitation in parks, and disorderly conduct. "I beg you not to pass the buck to the police department."

Captain Mark Iocco, commanding officer of Lower Manhattan's 1st Precinct, said that his cops have made 31 ticket-related arrests so far this year, including 16 for fraud, 8 for aggressive solicitation, 4 for assault, 1 for trespassing, and 1 for unlicensed vending, plus 104 summonses for soliciting on Parks Department property, namely, in and around Battery Park. He said the added rules would help deter nuisance vending.

"It’s not something we can arrest our way out of," he said. "That’s why we’re in support of this bill."

Moro Abdul Latif, a 30-year-old Go New York seller from the Bronx, had a more dire prediction for what will happen if the bill passes.

"I'm likely to be homeless," he said.

With reporting by Kellylouise Delaney.

#big government
#go new york
#gray line
#pearl-clutching
#punishing the poor
#ticket vendors
#toursim
#original
Do you know the scoop? Comment below or Send us a Tip
A new Gothamist is coming! We’ve moved comments over to our beta site. Click here to join the conversation and get a preview of our new website.