The call-to-action cited a WNYC investigation that found deteriorated lead paint in four public elementary schools, along with lead-dust levels as much as 1,000 times the city’s current safety standard.

“We call on your agencies to immediately begin a collaborative response effort to identify the scope of current lead issues,” the letter reads. “Families should have the peace of mind knowing that their children are attending schools that are safe and free of dangerous lead levels.”

It asks the agencies to begin by prioritizing schools that will soon open for summer classes and the city’s free Summer Meals program. “With these programs beginning next week, it is critical that we ensure that children are not going to be exposed to hazardous conditions when the intent of their participation in summer programs is to enrich their academic potential,” wrote the members of Congress.

Research has shown that even small amounts of lead in a child’s bloodstream, particularly at younger ages, can cause brain damage, reduced IQ, hyperactivity and other behavioral problems. But few of the city’s regulations designed to protect children from lead exposure apply to school buildings.

“We don't know how many schools have high lead levels and that is totally unacceptable,“ Velázquez said in a telephone interview. “Parents have a right to know what their children are being exposed to, and we want to know how the students will be cared for should elevated lead dust be found.”

She also urged the city to work in concert with her and other members of Congress in addressing what would likely be a costly testing and remediation process.

“Through the appropriations process, we could request some federal funding to tackle this issue,” Velázquez said. “We’ve got to be more proactive. We need to know the facts and based on those facts then determining what kind of legislative action we can take here in Congress.”

The members of Congress asked the agencies to make test results available to the public, and to develop a plan for moving students to alternative, lead-free sites if a building is found to have lead-dust levels that exceed new safety standards recently adopted by the city’s health department.

“We are fully aware that these challenges were not created overnight,” they said. “But we must all work together to resolve this problem immediately and ensure that New York City schools are ready to receive students.”

In January, Mayor Bill de Blasio pledged to “fully eradicate” childhood lead exposure in the city by 2029. But speaking on NY1 Monday evening, he called WNYC’s findings into question.

“This report does not conform to what we know,” said the Mayor. “We do our testing with certified technicians. So I don’t know what to make of the results.” 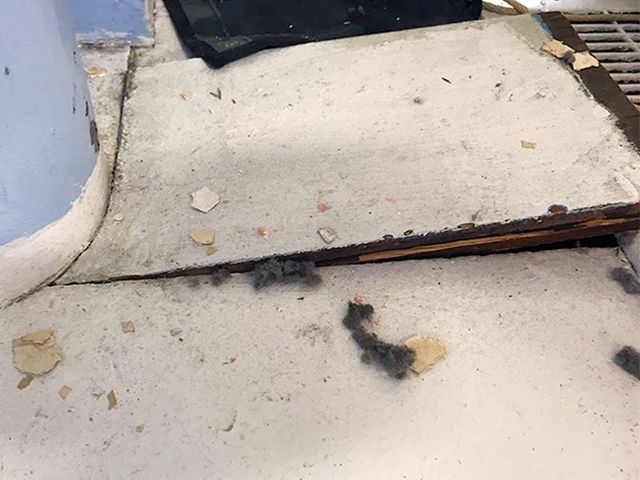 According to the Department of Education, all 3-K, pre-K and Kindergarten classrooms are tested every year using X-ray fluorescence analyzers, or XRF, which can detect the exact lead content of painted surfaces. However, experts on lead exposure tell WNYC that annual XRF testing does not necessarily ensure safety. And the agency is not required to conduct tests for lead dust in classrooms or elsewhere in school buildings, except after a renovation. The health department has emphasized that lead dust is a primary route of exposure for children in New York City. It typically enters a child’s bloodstream through hand-to-mouth activity.

The DOE is required to visually inspect classrooms for peeling paint and to remediate deteriorated surfaces. But WNYC found cracked, chipping, and peeling paint in all four of the school buildings it tested. It is not naming the schools because principals at two of the buildings asked not to be identified out of fear of running afoul of DOE policy and of drawing attention to their schools for what is potentially a widespread problem. According to an analysis of tax data, there are over 500 school buildings constructed before 1960, the year lead paint was banned in New York City. DOE records show the department continued to use lead paint until 1980, and nearly 700 schools were built before then.

“It is important to note that this is a random sample from multiple boroughs,” the delegation’s letter said of the four schools WNYC tested. “It is not, therefore, unreasonable to conclude that the number of schools where students are exposed to high levels of lead is potentially significant.”

The DOE had no immediate response to the letter. But in an interview on Monday, Carranza appeared open to changing DOE’s testing protocols if he felt it was warranted.

“We have a robust system for addressing any situations that come up with lead,” he said. “But that being said, we're always looking to improve and get better and make sure all of our classrooms are safe.”

The Department of Health and Mental Hygiene did not immediately respond to a request for comment.

“We shouldn't have to tell the institutions caring for our children to keep them safe,” Johnson said in a written statement. “But unfortunately, these results speak for themselves.”

In March, the Council passed ten new pieces of legislation that toughen the city’s lead-protection laws. It plans to take up an additional raft of lead legislation later in the year.

“The mayor takes possible lead exposure very seriously, which is why DOE goes above and beyond what the law requires in their testing protocols," a spokesperson from the mayor's office told Gothamist/WNYC today. "Out of an abundance of caution, we’ve instructed custodians at all elementary schools built before 1985 to visually inspect all relevant spaces again this week, which they do routinely throughout the year. As confirmed by the Department of Health, the school setting does not present a principal risk of lead exposure, and the DOE’s protective protocols help to ensure that schools remain safe.”