It's been one week since Mayor de Blasio outlined his sprawling One NYC plan, pledging to reduce commercial waste disposal—trash generated by businesses, restaurants, and medical facilities— 90% by 2030. Today, dozens of commercial sanitation workers, both union and non, rallied outside of City Hall with environmental advocates and representatives of several union chapters, calling attention to what they say are inhumane and wasteful working conditions.

While these groups are pleased with de Blasio's lofty goal, they are under no illusion that the task will be easy. The Business Integrity Commission (BIC), which was instated in the late '90s to bust mob control over trash collecting trucks, currently regulates 2,000 licensed private garbage carters across the five boroughs. And while organized crime is less of an issue, the BIC's pro-competition model has led to a huge increase in the number of garbage trucks on the road—trucks that are free to overlap inefficiently, increasing noise and air pollution.

Allan Henry, a sanitation worker for 28 years and member of Teamsters Local 813, attended this morning's rally. He explained, "When I was working on a truck, my route was about 75 to 100 miles on any given night. I was driving through half a borough. Sometimes I'd see six different companies on one block." In addition to pollution, this leads to unsafe working conditions. "These drivers are driving all night long," Henry said. "Come the morning time, you've got half-asleep drivers on the road. I'm telling you from experience: When the morning time comes, you're going to be dozing off."

There's also a lack of incentive for businesses to recycle under the current system. According to documents presented at today's hearing, commercial trash collectors charge most businesses a flat fee, regardless of whether or not they separate out recycling. A study released by Transform Don't Trash NYC this month estimated that the commercial recycling rate is just 24%.

Henry's experience on the job suggests that recycling standards are even worse. "There's virtually no recycling going on," he said. "I've worked in the commercial sanitation industry for 28 years, and I've never once recycled bottles or cans. The few people that actually do recycle, when the garbage truck comes, it just goes right in with the garbage." 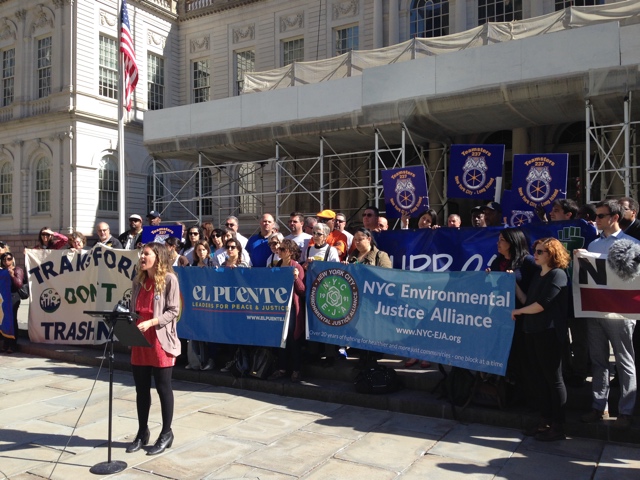 Angela Tovar of Sustainable South Bronx has witnessed firsthand the impact of the current commercial waste system on low-income neighborhoods. She told us after the rally, "The Hunts Point community hosts 13 waste transfer stations, that handle about 1,200 tons of waste every day. Because of the inefficiencies of the system, not only do we see the overburden of waste facilities... we see traffic on local streets."

Tovar added, "It's exacerbated the asthma issue, and it's become a barrier for people to access the local water front."

But Department of Sanitation Commissioner Kathryn Garcia pointed out that any overhaul to the trucks would be very expensive. By way of comparison, Garcia said DSNY is in the middle of a department-wide truck upgrade, and each vehicle costs thousands of dollars to upgrade. "It's not cheap, and it's not easy," she said.

Tovar also called for a zoning system, which would confine private waste management companies to geographic areas, a change that's fully endorsed by Transform Don't Trash NYC. Under such a system, drivers wouldn't have to cover as much ground, and waste management facilities would be less geographically clumped.

Paul Steely White of Transportation Alternatives applauded this idea, arguing that too many trucks on the road leads to more accidents. "One of the most tragic manifestations of this dysfunction is traffic safety," he said. "Innocent New Yorkers are being struck, killed, and injured by these large commercial trucks." With more rational routing, "We can literally save lives."

However, BIC commissioner Dan Brownell emphasized that before any major overhaul can be made to the system, zoning or otherwise, BIC needs to conduct a comprehensive study of waste collection across the city, as part of One NYC.

That study will take at least six months, but change can't come soon enough for sanitation workers like Michael Bush, who works for Five Star Carting, a private trash collection company based in Maspeth, Queens. "Five Star doesn't train anyone. They don't care. I do this job because I have to care for two sons. I shouldn't be treated like shit," he said. "Excuse the French."

#City hall
#Commercial Sanitation
#commercial waste
#One NYC
#recycling
#trash
Do you know the scoop? Comment below or Send us a Tip