As of mid-March, 22 drivers have been charged with misdemeanor failure to yield under the new Right of Way Law, which went into effect in August as part of the mayor's Vision Zero plan to end traffic fatalities. Six of those charged were MTA bus drivers, and the unions representing the drivers are in the midst of a campaign to convince the public that the law is unfairly targeting them. "The notion that you have to lock up bus drivers, simply because they're involved in an accident, is just plain wrong," says Larry Hanley, the president of the Amalgamated Transit Union.

Hanley called the arrests of the bus drivers, who police determined all fatally struck pedestrians who had the right of way, "inappropriate."

At a presentation for reporters yesterday entitled “Hey, You Got The Wrong Guy,” Hanley and the union described bus-related fatalities in grisly detail, and said that a variety of factors, including long working hours without breaks, pressure to be on time, and blind spots on the buses themselves all contributed to the fatalities, but that the drivers shouldn't be blamed for them.

“Bus drivers don’t design buses, they simply drive them," Hanley said, pointing to the combined width of mirrors and pillars in the front of the bus, which can exceed fourteen inches.

"The notion that we’re going to design buses with these inherent flaws and then demand that bus drivers adjust by shifting their bodies around so that they can get beyond the unnecessary disruption—we’re creating fatalities, and we’re not fixing them." 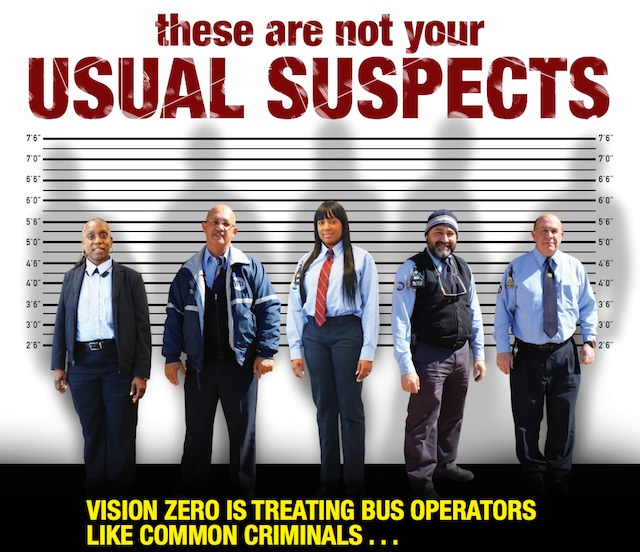 A TWU ad that targets the Right of Way Law

Haley said that it would cost roughly $300 to improve the design of each bus (the MTA has 5,600 buses in its system), and that the MTA's current budget crisis was no excuse to not install the improvements. “Honestly, if we can’t get the MTA to fix this because of funding, the MTA should go out of business. When you have a safety issue like this and the MTA gets ahold of it, money is no object.”

Queens Councilmember I. Daneek Miller, a former bus driver, has proposed legislation that would exempt bus drivers from the Right of Way Law; the bill is still in committee.

Paul Steeley White, the executive director of Transportation Alternatives, said in a release that he supported the technical fixes for the buses, but noted that "it was inappropriate for bus drivers to portray themselves as the victims of these preventable crashes."

"Last year alone, MTA bus drivers struck and killed eight pedestrians who were in crosswalks with the right of way," said White. "The Right of Way Law is meant to protect all of New York’s families, children and seniors who need to be able to cross our streets safely. The unions should be standing up for these New Yorkers, instead of seeking to have themselves exempted from a commonsense, lifesaving law."

"We want to go home to our families the same way you do,” Patafio said. “The question is, how did bus operators become the center of Vision Zero? Operators, statistically, are on the bottom of the list when it comes to accidents. So we get it, we understand Vision Zero, we want it! More than most. But they should be making us a partner, not targeting us.”

#bus drivers
#MTA
#pedestrian fatalities
#pedestrian safety
#twu
#vision zero
#original
Do you know the scoop? Comment below or Send us a Tip