City officials have launched a new campaign supporting transgender bathroom rights featuring PSAs that encourage New Yorkers to "Look Past Pink And Blue." The new Be You campaign encourages residents to use the bathroom consistent with their gender identity, rather than their birth-assigned sex, and will soon be seen in subway cars, bus shelters, phone booths, and community newspapers.

Mayor Bill de Blasio and the NYC Commission on Human Rights announced the new campaign Monday. “No one deserves to be denied access to bathrooms or discriminated against for being who they are. Every New Yorker has the legal right to use the bathroom consistent with their gender identity, no questions asked - and these powerful ads affirm this right,” the Mayor said. De Blasio stressed New York's history as a leader in the fight for LGBTQ rights, where gender-reassignment surgery can be covered by insurance and city agencies are barred from restricting bathrooms based on gender.

"While other cities and states are legislating intolerance and taking away individuals’ right to use bathrooms consistent with their gender identity, we are proudly standing with our transgender and gender non-conforming New Yorkers," de Blasio added.

City officials say the campaign is the nation’s first government-led citywide ad campaign for transgender persons' right to choose a bathroom based on their identity. The ads, along with associated videos, feature real transgender New Yorkers, one of whom is Bronx resident Alisha King. 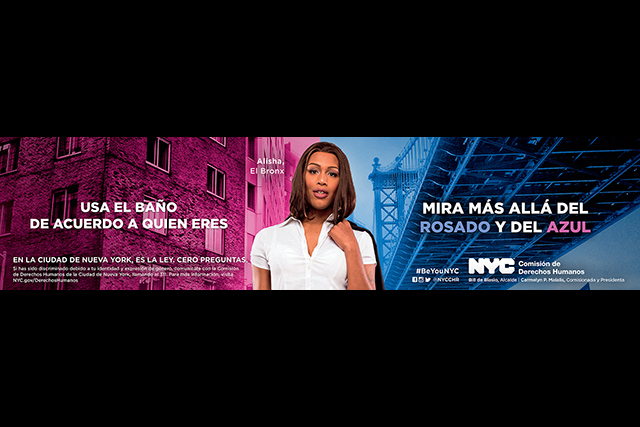 “Bathroom discrimination is a regular occurrence for the transgender community,” King said Monday. “So much so that many of us avoid even using public restrooms to begin with. I sincerely hope these ads help people understand that transgender people are people just like you. We just want to use the restroom safely and be treated with respect.”

Opponents of transgender bathroom rights have made claims that allowing someone to use a bathroom based upon their gender identity fosters a "fearful and intimidating and unhealthy and unsafe environment." That anti-trans sentiment, however, has been widely debunked by safety advocates and and police departments, including the NYPD. "In the 14 years that New York City has protected equal access to bathrooms, we know of no incidents where this policy has presented a public safety concern," Police Commissioner Bill Bratton said Monday. "The NYPD protects the safety of all New Yorkers."

Additionally, the city has published a fact sheet meant to correct common myths and prejudices about bathroom use and transgender rights. 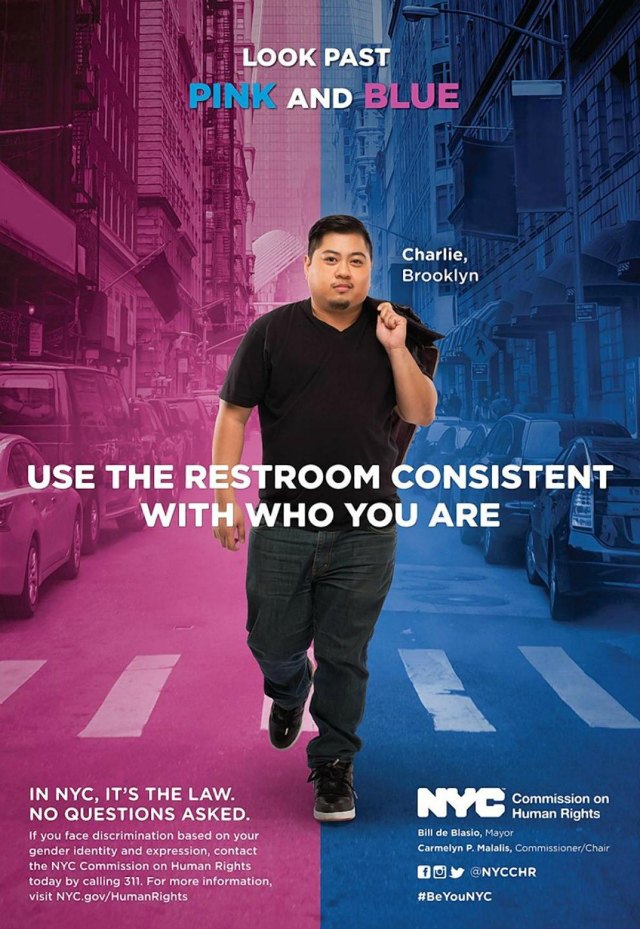 In truth, it is transgender New Yorkers who are most often at risk, Human Rights Commissioner Carmelyn Malalis argues. “We created these ads to remind every New Yorker, cis and transgender alike that the City protects your right to live and work according to your gender identity and expression, including your right to use bathrooms consistent with their gender identity," Malalis said in a statement. "Far too often, transgender people suffer bullying, harassment and violence for being who they are. These ads show that transgender people, like everyone else, have the right to use the restroom in peace.”

#bathroom laws
#bill de blasio
#commission on human rights
#gender identity
#transgender rights
Do you know the scoop? Comment below or Send us a Tip