New York City’s Board of Health has unanimously voted to uphold the Health Department’s emergency order announced last week that requires everyone in four Williamsburg and Bedford-Stuyvesant zip codes to be vaccinated for measles. The board also extended the order indefinitely until the current outbreak is over.

Though no one has been fined the $1,000 penalty so far for refusing to comply, Health Commissioner Oxiris Barbot said the mandatory vaccination order was already having its intended effect. An estimated 500 children aged one to five in Williamsburg got the measles vaccine in the last week, she said.

“The purpose of this emergency order isn’t to fine people,” Barbot said. “It’s to stress the urgency and the importance of getting vaccinated and to enlist as many people as possible spreading the message that these vaccines are safe and effective.”

Despite that uptick in immunizations, the City’s Health Department estimates about 14 percent of Williamsburg toddlers aged one to five, totaling 3,350 children, still have not been immunized, according to data from the Citywide Immunization Registry.

As of October, New York City had seen confirmed 329 measles cases, the majority in Williamsburg. Twenty-five people needed to be hospitalized and six of those were admitted to intensive care units. 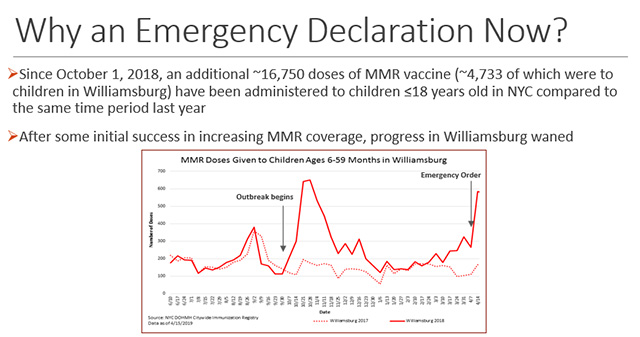 Deputy Health Commissioner Dr. Demetre Daskalakis told the Board of Health Wednesday about some of the obstacles the department has faced while trying to control the six-month-long outbreak.

“There’s a lot of things we’re working against,” Daskalakis said. “Parents choosing not to seek medical care for infected children, measles parties to intentionally expose children to the virus, spreading of misinformation including by some pediatricians.”

Parents of five unnamed parents of unvaccinated children have sued over the city’s vaccine mandate, and both parties are due in court on Thursday.

Department of Health officials track a recent spike in measles cases to a January incident where an unvaccinated child who had the measles but wasn’t showing symptoms went to school at Yeshiva Keliath Yakov and exposed other unvaccinated children to the virus, resulting in more than 41 new measles cases. Since then, infections have been on the rise, though last week there were fewer new infections than in prior weeks.

“[That] really [provided] the spark to the kindling to result in these soaring numbers that you see,” Daskalakis said. 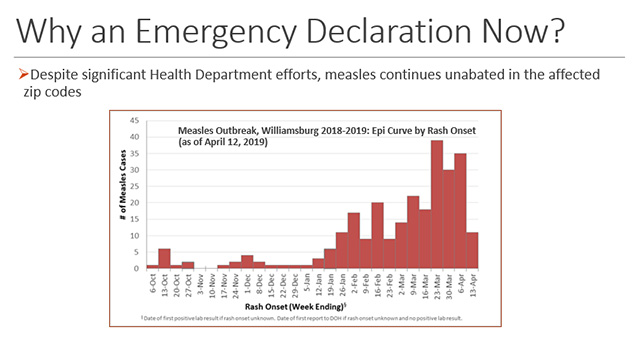 Beyond the mandatory vaccination order, the city has ramped up enforcement of its requirement that yeshivas exclude unvaccinated children, officials said. Department of Health officials have found 23 Williamsburg yeshivas were violating the order; earlier this week, the city forced a day care program run by the United Talmudical Academy with 250 kids to close down for failing to provide adequate immunization records after repeated attempts to gain access to them.

“Most people are not staunchly anti-vaccination forever and ever,” said Malkey Rosin, a school nurse in a yeshiva who is working with a group of other nurses to fight anti-vaccination propaganda targeted at the ultra-Orthodox community which has created fears that the vaccines causes autism, among other misinformation. “Most people are just confused moms, and they’re holding a tiny little baby and being, like, but why am I doing this?”

#health department
#measles outbreak
#williamsburg
#yeshivas
#original
Do you know the scoop? Comment below or Send us a Tip