NYC Board Of Elections "Succeeded At Failing Beyond My Wildest Expectations," Says Council Member Williams

At PS 198 this auditorium is used just to hold people for hours before the vote. Does not include outside line @boenyc twitter.com/JumaaneWilliam…

I overheard a #pollworker tell #voters to vote all #Democrat or all #Republican! Sigghhh... @boenyc. Training is also important.

Never received so many problems so early from so many places. PS 152 88 year old just left w/voting. @boenyc

Williams, who took issue with the Board of Elections' primary problems last month, told us:

I didn’t think the Board of Elections could do a worse job than they did on Primary Day, but they succeeded at failing beyond my wildest expectations. For voters to believe that there is a conspiracy to disenfranchise them reveals a crisis in our democracy. Hurricane Sandy was an unfortunate obstacle, but the conditions I witnessed make it obvious that the problems went beyond this storm.

I expected problems in hard-hit areas, but nothing close to this in my district. There was no contingency planning and no forethought of staffing and logistical needs, and frankly if this was the case our local elections should have been postponed. New Yorkers want the Board of Elections to be held accountable. No more excuses, it’s time for a complete overhaul. 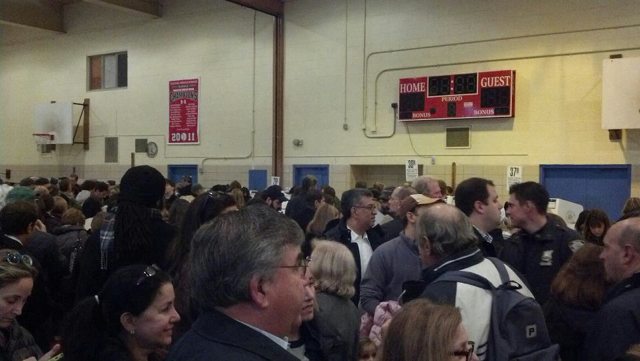 The voting line inside PS 167 (via reader DL)

City Council Member Gale Brewer (D-Upper West Side), who chairs the Council Committee on Governmental Operation, concurred that there are some big problems:

New Yorkers turned out in droves to vote yesterday, which should be applauded. Unfortunately, this high voter turnout also led to long lines, ballot scanner breakdowns, and confusion at many poll sites across the city. Adding to the confusion was an Executive Order signed by the Governor late Monday afternoon which created an unforeseen demand for affidavit ballots.

The understaffed Board of Elections did work hard to alleviate many of the problems, but the complications we saw yesterday are indicative of a larger issue. I will be seriously reviewing the difficulties that occurred yesterday in order to come up with a comprehensive plan to make it easier for all New Yorkers to participate in the electoral process.

We've heard reports of polling sites where they ran out of affidavits, where people were told affidavits were just going to be trashed, where people were told they weren't on the voter rolls (even though they've voted there in many other elections), where poll workers were having a had time with figuring out sequential numbering, and where only eight people got to vote on the new scanners over a 32-minute period.

Mayor Bloomberg didn't mince words today, telling reporters there was "no reason to have a system we have adiminstrated as we have it. The system is as poorly designed a system as we have ...computers do everything, and yet we've gone to a paper system."

He pointed out how the Board of Elections commissioners are picked by party bosses, "It should not be two parties and county leaders picking their buddies to supervise the basis of our citizenship, the ability to pick your leaders," and complained once again of the lack of privacy and said it was "chaos...it was a nightmare."

#Board of Elections
#election 2012
#election day
#gale brewer
#jumaane williams
#original
Do you know the scoop? Comment below or Send us a Tip