As the City Council nears the end of a lengthy debate over Mayor de Blasio's controversial affordable housing plan—one that could rezone some of the city's poorest neighborhoods to allow for taller residential buildings with a percentage of affordable apartments—Comptroller Scott Stringer has identified more than a thousand city-owned vacant lots that he argues are prime for development into deeply affordable housing. Many of these lots, it turns out, have been sitting fallow for decades.

“When the City owns property, we get to call the shots about how land is developed and for whom, which is why these properties are so valuable,” Stringer said in a statement.

According to the Comptroller's audit, the New York City Department of Housing Preservation and Development (HPD) has been sluggish in developing a chunk of the more than 100,000 vacant lots and abandoned apartments that it seized after the 1970s fiscal crisis in NYC. As of last September, Stringer's office identified 1,131 vacant lots across the five boroughs, concentrated in Brooklyn and Queens.

HPD is required under city law to set concrete timelines for its urban renewal projects. However, the audit claims that "the projected schedules are often pushed to a later date and sometimes no date is specified at all."

A vacant lot on Rockaway Avenue near Pitkin Avenue in Brownsville (Google Maps).

According to the city, only 670 of the 1,131 vacant properties identified by the Comptroller are suitable for development. About 300 of the identified properties have proven challenging to develop because they are in flood zones, or half a mile from the nearest bus stop, or too far from schools and grocery stores to develop as residential units. Another 150 projects have been deemed more suitable for other development projects, like park land or community gardens. In one case, the city confirmed, a plot is going to be built into an NYPD precinct station.

HPD also said on Thursday that 400 of the 670 viable lots are already in the HPD pipeline for development, and pledged that the remaining 270 will be added to the pipeline over the next eight years. Those already earmarked for development include—a de Blasio spokesperson was eager to point out—two lots singled out in the NY Times' coverage of the Comptroller's report.

Indeed, the lead image in that story is of a vacant lot on Powell Street in Brownsville, which is currently slotted for development into the third phase of Livonia Commons, a complex of 800 affordable housing units approved under former-mayor Bloomberg. The income thresholds planned for Livonia Commons are about $18,000 a year for a studio and $25-50,000 a year for a three-bedroom.

But ground isn't scheduled to break on this property until 2017, and demand is high. Phase one is up (the lottery is closed), but phase two has yet to be financed. For comparison, in 2010 a similar affordable housing development received 15,000 applications for 43 apartments.

De Blasio spokesman Wiley Norvell stressed that the remaining vacant lots in NYC make up a small percentage of the 100,000-plus acquired decades ago, and said that their designation must be considered slowly and carefully—like a precious resource—since these properties are the city's best bet not just for Extremely Low & Low-Income Affordability (ELLA) housing, but also new parks, schools, and gardens. 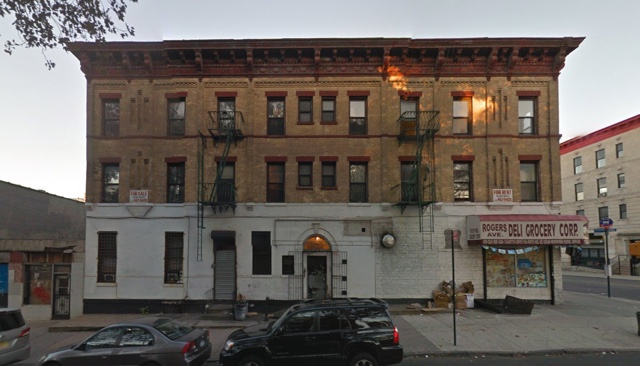 159 Rogers Avenue in Crown Heights, one of several abandoned, tax-delinquent properties in the neighborhood identified by UHAB (Google Maps).

In an accompanying report, also released Thursday, Stringer suggested that the identified lots could be developed more speedily by the creation of a "land bank"—a nonprofit that could potentially tap into pre-existing funds in the state comptroller's office that are dedicated to acquiring vacant and abandoned properties. Land banks, already established in NY cities like Buffalo and Syracuse, lease exclusively to nonprofit developers to insure that housing remains affordable across generations.

Stringer also argues that the land bank model could be used to acquire nearly 2,000 vacant and tax-delinquent buildings across the city that end up in the city's tax lien sale year after year.

The concept is in sharp contrast to Mayor de Blasio's often-critiqued Mandatory Inclusionary Zoning proposal, which relies heavily on private, for-profit development. However, page 67 of the Mayor's affordable housing plan [PDF] makes explicit, if brief, mention of the possibility of land banks—"There also exists a real-time opportunity for the city to work with the Attorney General to receive funding to create a land bank in the City," it reads.

Still, HPD countered this week that the land bank model won't do anything to increase the feasibility of developing the hundreds of vacant lots in flood zones, or those too far from transit, schools, and groceries stores to make sense for development.

But Cea Weaver, an assistant organizing director for the Urban Homesteading Assistance Board [UHAB], says that the land bank model is still highly feasible for those vacant and tax-delinquent properties Stringer identified across the city, which are dispersed through neighborhoods that already have plenty of established resources.

"The city's right: there's not much vacant land, and it's a precious resource," Weaver said on Thursday. "But the game changing stuff in this report is how we might utilize not just the vacant land, but also these persistently delinquent properties—the ones that are [sitting vacant] year after year."

#affordable housing crisis
#scott stringer
#Tax-delinquent
#vacant lots
Do you know the scoop? Comment below or Send us a Tip