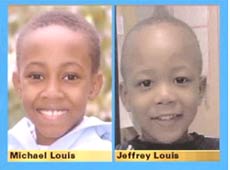 A great story: On Wednesday, the NYPD had alerted news organizations about two brothers missing in Manhattan since Tuesday. And a NY1 intern Nicole Porette, who had seen the notice, recognized the boys when she was walking by the 14th Street and 8th Avenue A/C/E station!

The boys, 13-year-old Michael Louis and 8-year-old Jeffrey Louis, happened to be talking to transit police at the time, but the boys never mentioned they were missing. Porette said, "You could tell they were scared, they were frightened. I think they thought they were going to be in trouble for being gone." She added, "I told the police officer I recognized them from the day before...We had gotten a police notice that two boys were missing and I saw their pictures and we all commented on how cute they were. So that's how I remembered them."

The boys, who used to live in Manhattan but currently live in Virginia, were visiting their grandparents on West 106th Street. WNBC reported they slipped out when their grandmother was in the shower ("they had apparently taken a Nintendo game system with them...and also a cell phone, but police did not know whether it was active or the number."). The boys' uncle told NY1 that Porette "has been a blessing for the entire family. We appreciate her concerns. I just want to thank her."

#missing brothers
#ny1
#nypd
#subway station
#transit police
Do you know the scoop? Comment below or Send us a Tip