Five female anchors with NY 1 have filed a lawsuit against the channel's parent company, Charter Communications, contending that their employer has consistently prioritized male journalists at their colleagues' direct expense—a pattern of gender discrimination that only escalates as women reporters age, the lawsuit claims.

"We feel we are being railroaded out of the place," longtime NY1 anchor Roma Torre, 61, told the NY Times. "Men age on TV with a sense of gravitas, and we as women have an expiration date."

The lawsuit—brought by Torre, Amanda Farinacci, Vivian Lee, Jeanine Ramirez, and Kristen Shaughnessy, and filed Wednesday in Manhattan's Federal District Court—alleges that, when Charter purchased NY1 in 2016, it undertook a modernization effort that involved weeding out the older woman from the on-air talent pool. These women suddenly found themselves with less airtime, the lawsuit says, cut from campaigns, blocked from high-profile reporting roles, and met with radio silence when they aired their grievances. Their "then-blossoming careers have wilted" since the takeover, the lawsuit claims.

The female anchors allege that "these opportunities which have been snatched from [them] have been distributed to numerous younger women and men with substantially less experience," allegedly changing the station's once community-focused atmosphere into one that prizes appearances over substance. When the plaintiffs complained, the lawsuit alleges, their grievances "have either not been taken seriously or been outright ignored, and have only led to retaliation and further mistreatment."

"I'm faced with the feeling of what it's like to be edged out," 44-year-old Vivian Lee, a NY1 anchor since 2008, told the Times. In January, the network canceled her weekly show, "Spotlight," and has limited her anchoring opportunities. "It's really heartbreaking."

Lee's fellow complainants have felt that, too: Torre says her on-air spots have been slashed from three hours per day to one, and her theater reviews dropped from the weekly roundup—despite Emmy nominations, awards, and consistently "glowing" annual reviews. Women over 40 have been benched in favor of women in their 20s and 30s, the lawsuit says; women whom management seems "to be grooming" as "'literal 'replacements' that track each of Plaintiffs' respective appearances and ethnic backgrounds." Ramirez's go-to fill-in anchor, according to the suit, is a 37-year-old journalist who is also Latina; a 26-year-old white woman with light brown hair typically fills open slots for Farinacci, a white woman with light brown hair. 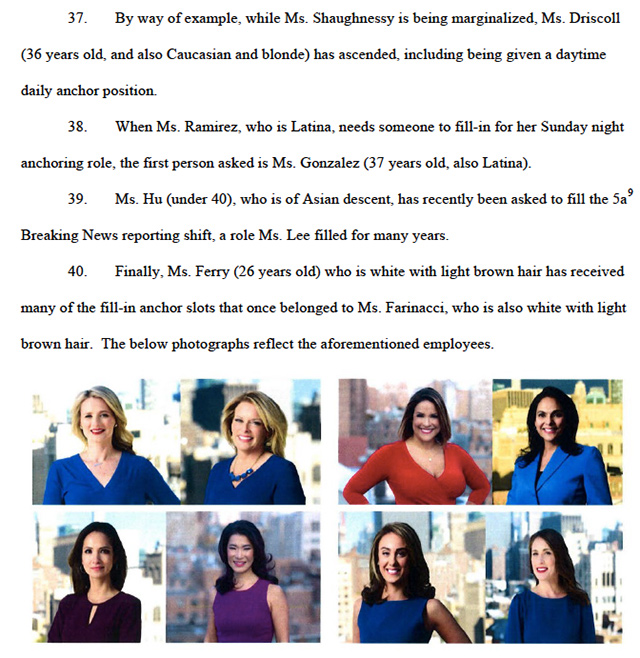 Screengrab from the lawsuit, showing NY1 anchors next to their alleged "replacements"

The lawsuit also alleges that male anchors may be paid better than their female colleagues: Torre says she makes "less than half" of what morning host Pat Kiernan does, and despite the fact that she has been on air for 25 years, his 20-year anniversary with the network merited an extensive promotional campaign. "Ms. Torre, by contrast," the lawsuit states, "with a longer tenure and celebrating 25 years on air with her own daily live show, received no special promotion whatsoever."

"It fits the rhetoric of 'These whiny old ladies are complaining again,'" NY1 Staten Island reporter Farinacci, 40, told the Times. "But this is career-ending, these opportunities that we're not getting."

"It's always there as a woman," she added, noting that the female anchors have tended to just disappear while their male peers get promoted. "How much longer do I have? Where am I going?"

NY1 had not responded to Gothamist's request for comment by time of publication, but in a statement to the Times, Charter emphasized that women make up over half NY1's on-air talent, and over half its anchors are older than 40. "We take these allegations seriously and as we complete our thorough review, we have not found any merit to them," a spokesperson said. "NY1 is a respectful and fair workplace and we're committed to providing a work environment in which all our employees are valued and empowered."

Proskauer Rose, the law firm representing Charter, did not immediately respond to a request for comment. (Disclosure: Proskauer Rose was retained by Gothamist's parent company, New York Public Radio, in 2017 to investigate allegations of systemic discrimination at the organization.)

In a statement to Gothamist, the complainants' attorney, Douglas H. Wigdor, countered that the company's nodding to its gender and age breakdown "misses the point."

"The question is not how many women there are, but where and when they appear on air," Wigdor said. "Unfortunately, it is men and younger women that are getting the top anchor positions and time slots while older women are pushed aside and marginalized."

#age discrimination
#charter
#gender discrimination
#lawsuit
#ny1
#spectrum
Do you know the scoop? Comment below or Send us a Tip
A new Gothamist is coming! We’ve moved comments over to our beta site. Click here to join the conversation and get a preview of our new website.