NY Wants to Get to Know Caroline Kennedy 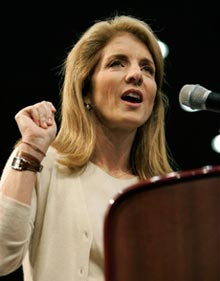 Now that Caroline Kennedy, scion of a political dynasty, has officially decided she wants to take Hillary Clinton's Senate seat, lawmakers and the public alike are awaiting to know more about her. Sure, she wants to be the junior Senator from New Yorker, but Kennedy has yet to make any public announcements—so far, Governor Paterson has been the one to tell the media, "She told me she was interested in the position."

The NY Times says it won't be easy for the Manhattan lawyer and mother of three. NY1's political director Robert Hardt says, “The tabloid culture is going to relentlessly follow her across the state. If she doesn’t dot every I and cross every T, the New York tabloids are going to be, ‘Gotcha!’ New York political reporters just don’t know Caroline Kennedy. We just can’t wait to talk to her.”

Kennedy did call Mayor of Buffalo Byron Brown, whose name has also been mentioned as a possibility for the Senate seat. Brown told the Times that Kennedy said she wanted to learn more about regional issues and visit—and he also told her, "I think upstaters are going to want an upstater on the ticket."

Clinton herself is trying to stay out of the fray. Politico's Ben Smith reports that Clinton's staff has told some Kennedy detractors—like Rep. Anthony Weiner— "their comments weren't appreciated, and that if they have a candidate they prefer that is motivating their comments and actions, they need to make that crystal clear so that nobody thinks we're behind it," according to a source.

A Democratic source tells the Daily News, "It's a brilliant pick for Paterson. You choose a Kennedy, how can people be angry? She's in the pantheon. It's not that it's owed to her, but there's no way anyone could say that Caroline Kennedy, that American icon, doesn't own a piece of all of us."