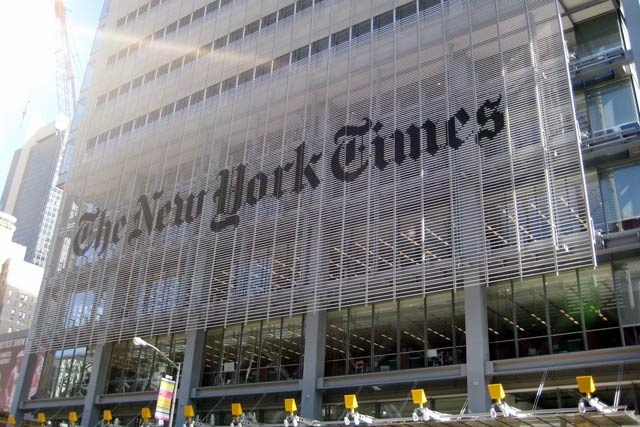 Well, it's handy having a brand new trophy building: The NY Times reports, "The New York Times Company plans to borrow up to $225 million against its mid-Manhattan headquarters building, to ease a potential cash flow squeeze as the company grapples with tighter credit and shrinking profits."

The NY Times Co. owns 58% of the 1.5 million square foot tower, which opened last year (and has been a huge hit with thrill seekers this year); developer Forest City Ratner owns the other 42%. The Times adds, "The Times Company’s portion of the building is not currently mortgaged, and some investors have complained that the company has too much of its capital tied up in that real estate." Recently, the NY Times stock has been battered, forcing a 74% cut in the company's dividends.

In other media-related financial news, the Tribune Company, which owns the LA Times, Chicago Tribune and Baltimore Sun (not to mention the Chicago Cubs and Wrigley Field), is considering filing for bankruptcy.

#mortgage
#ny times
#ny times building
#Tribune company
Do you know the scoop? Comment below or Send us a Tip