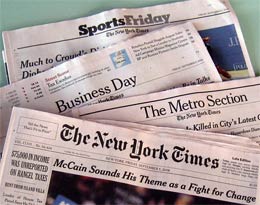 The Observer reports that the NY Times will announce later today "that it plans to cut the number of sections it has in the paper during some days of the week and it will fold in the Metro Section and Sports section into other sections of the newspaper."

Sources tell the Observer, "the Metro Section is moving into the A-section and the Sports section will move into the Business section for some portion of the week"--due to printing costs. Which makes some sense, but we wonder if advertising is also an issue--the sections have been feeling rather thin lately. The sources also offered a silver lining/ glass-half-full observation: the sections would have more flexibility with later printing deadlines, more opportunity for breaking news.

The Times raised its newsstand price last month and cut an 1.5" from its size last year. And from last week: "The New York Times Company announced today that in July total Company [which includes its other holdings, like the Boston Globe, About.com] revenues from continuing operations decreased 10.1% compared with the same month a year ago. Advertising revenues decreased 16.2% and circulation revenues decreased 0.5%."

Update: From the NY Times:

The Metro report will become part of the newspaper’s A section, which also contains the International and National reports, and the Editorial and Op-Ed pages, on Mondays through Saturdays, and possibly on Sundays, as well.

The Sports report will go into the section that begins with Business Day, on Tuesdays through Fridays, while Sports will remain a separate section on weekends and on Mondays.

#media
#newspaper
#newspaper sections
#ny times
#print
Do you know the scoop? Comment below or Send us a Tip